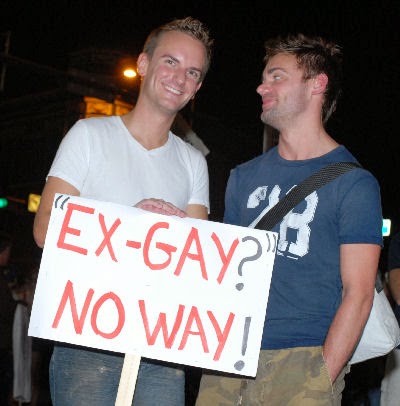 Last year Exodus International, the largest "ex-gay" ministry closed its doors after years of working to perpetuate the myth that sexual orientation was a "choice" and that being gay or lesbian could be "cured."  Concurrent with Exodus' closure, it last president much belatedly admitted that he knew of no one who had ever really changed their sexual orientation.  Needless to say, all of this caused howls and shrieks from the "godly Christian" crowd which has sought to keep the "ex-gay" myth alive for financial profit and the political purpose of opposing gay rights on every front.  Now, another prominent former "ex-gay" leader has joined the list of those admitting that he and others like him worked at perpetuating a lie.  The truth is that rather than throwing away thousands of dollars and undergoing dangerous and discredited therapy, those who suffer from religious brainwashing or who have selfish, self-centered parents would be far better served seeking therapy to overcome their religious brainwashing so as to find peace with how God/nature made them.  The Bilerico Project looks at this lates repudiation of the ex-gay lie.  Here are excerpts (read Smid's entire blog post too):
Former "ex-gay" minister John J. Smid, who left the ministry in 2008 and apologized in 2010, repudiating the "ex-gay" myth in a blog post and embracing homosexuality as a naturally-occurring variation of the human sexual experience.
Read more at http://www.bilerico.com/2014/02/former_ex-gay_leader_repudiates_ex-gay_myth.php#8BIAcWQ7APi2UdWd.99

Former "ex-gay" minister John J. Smid, who left the ministry in 2008 and apologized in 2010, repudiating the "ex-gay" myth in a blog post and embracing homosexuality as a naturally-occurring variation of the human sexual experience. Smid stated:

"The ExGay message of God's deliverance from the homosexual orientation has been destructive! It has created a dangling carrot of change without any real outcome of freedom from homosexuality. The damage has occurred in the subsequent loss of one's soul, or the destruction stemming from serial fleshly encounters that only leave one void and searching for the next one.

"I believe much of my grief today is also from how I played a role in furthering the message of deliverance from homosexuality. I used to teach that hope for their eternity would come when they found freedom. I conveyed a message that God would be more pleased with people who were not gay. I spent a tremendous amount of energy attempting to help men and women find a life of freedom of their natural homosexual desires.

"Today I realize that it is far better to help men and women accept their homosexuality is innate, and an authentic reality. Regardless of where it came from, it is what it is. There is freedom in Christ for someone to hope for intimate connection with anther compatible human being if they so choose to pursue it. For those who are satisfied with a life of singleness, there's a place for them to accept being gay and feel accepted and loved within that life experience. But neither choice can be made until they accept their homosexuality without shame."

Will this stop the catholic Church, Mormon Church and many others from preaching  and marketing the "ex-gay" lie?  Of course not.  There's too much money involved and it is too central to their efforts to marginalize gays under the law.  And once again we see that no one lies as often or as cynically that conservative Christians.  If their lips are moving, it is almost guaranteed that they are lying.  The larger public needs to fully realize this and give these people absolutely no respect or deference.
Posted by Michael-in-Norfolk at Wednesday, February 12, 2014