Euphoria is the best way to describe the emotion among the LGBT friends and allies with whom I have communicated since the release of Judge Wright Allen's opinion last night declaring Virginia's ban on same sex marriage to be unconstitutional under the United States Constitution.  Among the hate merchant crowd at The Family Foundation and the National Organization for Marriage one would think the world had just ended since one of their bulwarks for keeping LGBT Virginians inferior just fell.  Ironically, Judge Wright Allen rebuffed the criticism of black pastors who have allowed themselves to be used as tools to further hatred by beginning her ruling with a quote from the late Mildred Loving of Loving v. Virginia fame who supported same sex marriage:

We made a commitment to each other in our love and lives, and now had the legal commitment, called marriage, to match. Isn 't that what marriage is? . . . I have lived long enough now to see big changes. The older generation's  fears and prejudices have given way, and today's young people realize that if someone loves someone they have a right to marry. Surrounded as I am now by wonderful children and grandchildren, not a day goes by that I don't think of Richard and our love, our right to marry, and how much it meant to me to have that freedom to marry the person precious to me, even if others thought he was the "wrong kind of person"for me to marry. I believe all Americans, no matter their race, no matter their sex, no matter their sexual orientation, should have that same freedom to marry. Government has no business imposing some people's religious beliefs over others. . . . I support the freedom to marry for all. That's what Loving, and loving, are all about.

I have long argued that Virginia's anti-gay laws had only one real purpose: to impose Christofascist religious beliefs on all Virginians and to punish those of us who refused to accept their fear and hate based beliefs.  No matter how much the Christofascists - and the Mormon and Catholic Churches - have of late tried to claim that they are not motivated by anti-gay animus, their actions for decades, if not centuries tell the real tale.  Likewise, more recent arguments that marriage is for procreation and/or for the sake of children is a recent invention to serve as a smoke screen for the real motivations behind same sex marriage bans.  Thankfully, Judge Wright Allen saw through these disingenuous lies.  Here are some highlights from the Washington Blade's coverage (not Brian Brown's spittle flecked rant and his shots at a black woman judge - besides being a homophobe, Brown is a racist in my view):

“This decision is a victory for the Constitution and for treating everyone equally under the law,” said [Virginia Attorney General Mark] Herring in a statement after Allen issued her ruling in the Bostic case.

Former U.S. Solicitor General Ted Olson, who successfully argued against California’s Proposition 8 before the U.S. Supreme Court with David Boies, joined the lawsuit last September with the American Foundation for Equal Rights. Olson said in an AFER press release that Allen’s decision has “upheld the principles of equality upon which this nation was founded.”

“Virginia’s prohibition on marriage for same-sex couples relegates gay and lesbian Virginians to second-class status,” he said. “Laws excluding gay men and lesbians from marriage violate personal freedom, are an unnecessary government intrusion, and cause serious harm. That type of law cannot stand.”

Equality Virginia Executive Director James Parrish said Wright’s ruling “finally puts Virginia on the path toward allowing lesbian and gay couples to marry the person they love here in the place they call home.”  “This is an historic day in Virginia,” added Parrish.

National Organization for Marriage President Brian Brown blasted Allen.  “This is another example of an Obama-appointed judge twisting the constitution and the rule of law to impose her own views of marriage in defiance of the people of Virginia,” said Brown in a statement.


Brown also again sharply criticized Herring for not defending the commonwealth’s marriage amendment.  “This case also leaves a particular stench because of the unconscionable decision of Attorney General Mark Herring to not only abandon his sworn duty to defend the laws of the state, but to actually join the case against the very people he is duty-bound to represent,” said Brown.

Brown, of course ignores the fact that the judge who earlier this week struck down Kentucky's same sex marriage ban was a Republican appointee recommended for the bench by GOP Senator Mitch McConnell.  As always, Brown spews hate, animus and constant lies.  As the Virginian Pilot reports, Del. Bob Marshall, an author of the anti-gay Marshall Newman Amendment and a gay hater of the highest order had similar spittle flecked comments on the ruling:

Del. Bob Marshall, R-Prince William County, is one of the most conservative members of the House and was an architect of the 2006 marriage amendment. Still digesting the opinion as Thursday turned to Friday, Marshall took exception to its legal reasoning and its late arrival.  “It comes out in the middle of the night, just like a thief. This is how a thief would act,” he said of Allen’s decision, which became public after 9 p.m.

As for the late release of the opinion, from past experience, when matters are filed in the federal court electronic case system, it always takes a few hours for them to appear publicly on the site.   I suspect that Judge Wright Allen filed her ruling late in the day and it mere took the usual time period for the system to update.  But with Bob Marshall, one should never expect a truthful or honest statement. 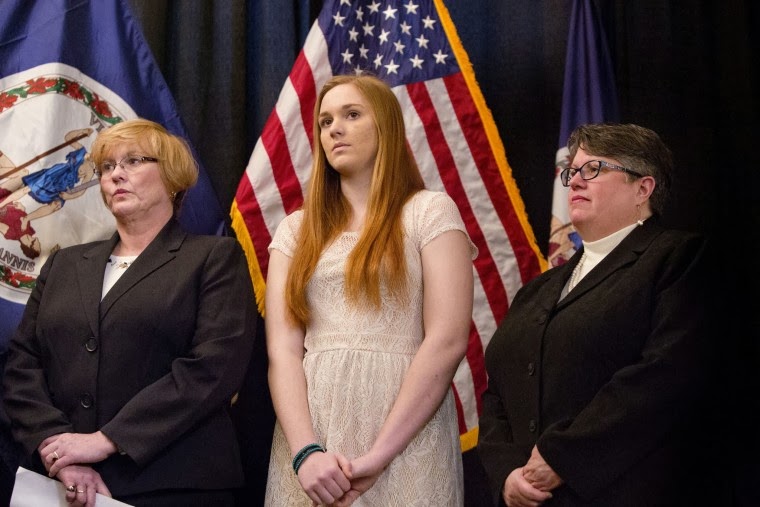 Posted by Michael-in-Norfolk at Friday, February 14, 2014