The Bizarre, Mentally Ill World of the Haters at Family Research Council 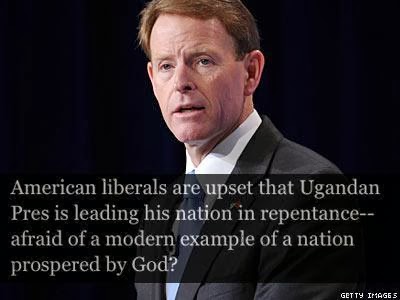 A majority of American Catholics may be accepting modernity, modern knowledge on sexual orientation, and same sex marriage, but among conservative Christians Christofascists who give credence to the pronouncements of hate merchants at Family Research Council, a designated hate group, the batshitery just keeps on increasing.   Take FRC president Tony Perkins - he has KKK connections and I think he is a self-loathing closeted gay man given his hysteria on homosexuality - who is shrieking that gay marriage will lead to the collapse of America.   One has to wonder when FRC's followers will pull their heads out of the sand and realize that they are being fleeced for money by Perkins and his cohorts.  The New Civil Rights Movement looks at Perkins' insanity:

It must be hell being Tony Perkins.  Imagine if everywhere you turned you saw a conspiracy designed to end the world, people plotting the extinction of mankind, people trying to end civilization, reduce religion to rubble, spin the universe into a world filled with godless heathens whose only goal is the destruction of Christianity and mankind itself.

On Friday on his “Washington Watch” radio show, Perkins — the head of the anti-gay hate group Family Research Council — revealed what he believes is happening in the world today, and how events will play out.

Picture this.
Same-sex marriage advocates will advance marriage equality.
Homosexuality will be taught as something that is normal to school children.
Sex ed classes will teach kids how to have sex with people of the same gender.
School children will think being gay is cool and will want to try it out. (Perhaps like smoking, or joining the baseball team.)
Then, they will all, or mostly all, choose to be gay — since the stigma has been expunged.
Because so many children will turn gay, the birth rate will dramatically fall, the United States of America will be unable to keep up with the rest of the world, losing us our economic superpower status.

Here's a partial transcript of the lunacy:

Perkins: No, because what happens when you change and you say heterosexual marriage is the same as homosexual marriage, then you change the curriculum in your schools and you have kids, as a natural part of growing up and developing, they’re curious and they don’t know, and we’re exposing them to even more sexuality and overt sexual messages and we’re telling them, ‘hey experiment.’ And that is what leads, in many cases, to children going down a particular path, is early childhood sexual exposure, sometimes it’s traumatic. And by normalizing that and mainstreaming that, what you will do is you will have more children going down that path and that’s why they want to get this message into our schools.

Caller: I understand your argument but is there any data to support that?

Perkins: What do you mean any data to support it?

Caller: You are saying if you expose children to homosexuality you will have more homosexuals.

Perkins: Well if you sexualize a culture — I can tell you the data is very clear on what’s happened in the last 30 to 40 years where we have inundated young people, children, with sexual messages and they become sexually active. So when you take and mix into that homosexuality and other forms of sexuality into that, yes they are going to move down that path, they are going to engage in what you tell them about. That is why it’s problematic, that is why parents are upset about what is happening in Hawaii and other states that are teaching their kids how to engage in homosexual behavior, or heterosexual for that matter. I don’t want my kids that are 11, 12 and 13 years-old taught how to put on a condom or taught about how to engage in sexual behavior with someone who has HIV in a safe fashion. That is not what the schools should be about. They should be about teaching our kids to read, to write, to engage in science. How do we ever expect to compete globally when we’re fixated on teaching our kids about sex?

There is, of course, no data to back up Perkins' hysteria.  Perkins' root problem - beside be mentally ill in my view - is that he refuse to accept that sexual orientation is inborn.  No amount of exposure to gays is going to make heterosexuals turn gay.  Just as no amount of "ex-gay" therapy is going to make gays straight.  Accept modern knowledge on sexual orientation and the whole problem goes away.

There is so much wrong with this. First off, I am admittedly getting old, so I was in elementary school a long time ago, but I don't remember them teaching me anything about marriage, and even in my junior high sex-ed classes, we got the biology of sperm and eggs, and the anatomy of the plumbing...but I don't ever remember them "teaching" us how to have sex...not even the heterosexual variety.

Are children being sexualized at an earlier age. Yes, I suppose they are, but that is not the result of homosexuals. Part of it is related to how much earlier children begin to sexually mature, and many think that's the result of the hormones being pumped into our food supply. Tony never says a word about that...but that would involve, well, science, and he knows that would be a challenge in comprehension for his listeners.

As for sex ed and data, there's pretty clear and substantial data that in the parts of the country where real sex ed is taught (contraception, safe sex practices, etc.) there is a significantly lower rate of teenage pregnancy than in states where only abstinence is taught...but again, Tony don't need to stinking data.