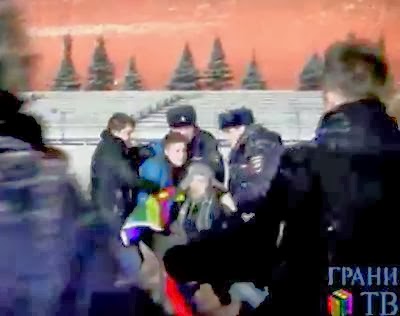 Proving yet again that the International Olympic Committee has learned absolutely nothing since it collaborated with Hitler's Nazi regime 78 years ago for the 1936 Berlin Summer Games, the International Olympic Committee has defended the arrests and beatings of LGBT activist in Russia, basically saying that citizens must obey the domestic laws of the host country.  As noted before, I hold the IOC in deep contempt and it has once again demonstrated its utter moral bankruptcy.  Let's not forget that Nazi atrocities done against Jews were done "acting in accordance with its [Germany's] laws."  This kind of defense of hate and violence is beyond disgusting.  BuzzFeed has details:

The International Olympic Committee has said Russia was acting in accordance with its laws when police detained 14 protesters in Moscow and St Petersburg on the day of the Olympic opening ceremonies. Some of those held in Moscow report being beaten while in police custody.

“We understand that the protesters were quickly released,” Emmanuelle Moreau, the IOC’s head of media relations, said in an email to BuzzFeed. “As in many countries in the world, in Russia, you need permission before staging a protest. We understand this was the reason that they were temporarily detained.”

Four LGBT activists were arrested Friday afternoon in St. Petersburg while taking a picture holding a banner that read, “Discrimination is incompatible with the Olympic Movement.” It was not even a real protest, said Anastasia Smirnova, one of those arrested, but rather intended as a private commemoration of the start of the games.

As the opening ceremonies began at 8 p.m. that evening, police descended on 10 LGBT activists in Moscow’s Red Square as they sang the national anthem while holding rainbow flags. Two Swedish nationals in the group were quickly released, but the rest were held for several hours during which some were reportedly kicked, choked, and threatened with sexual violence.

The speed of the police response in both cases made organizers believe police may have been tapping their phones to monitor their movements.

The IOC needs a complete overhaul, starting with the sacking of its entire current governing board.