"Christian" Bigotry is Alive and Well

I had the most outrageous situation arise with an interviewee for a position in my law firm. I pride myself that my firm is an Equal Opportunity Employer and does not discriminate because of race, color, religion, sex, marital status, national origin, age, sexual orientation or disability. In keeping with this policy, I inform people interviewing for positions that I am gay and have a number of gay clients. It’s not something I have to do, but out of respect for people’s beliefs and in the endeavor to make sure that my office is a place where everyone can feel comfortable, I tell everyone who interviews for a position. Usually, no one has an issue with my orientation and everything is fine. In fact, when I tell most people, look at me at me strangely and then ask, why would I think that would even be an issue. That is until last week. In follow up to an interview, my office manager received the following e-mail message:

"Thank you for the e-mail, and also for the interview. It seems that you do have a less stressed office than most firms, but I have decided to continue looking until I feel comfortable with the choices that become available. . . . , and as Michael was honest with me, I will be honest with him.

Personally, my heart grieves over all those who choose the lifestyle that Michael chooses, because I believe that choice brings a host of, known or unknown, forces into their lives. I would be grieved working with anyone who wants to continue to bring harm to themselves, and harm can come in many forms. I watched my father do that for years, (he was an alcoholic, and it killed him) and it saddens me when I see people not take good care of themselves, when the strength of God's truth is there to help them in their time of need. He can make our lives healthy. I felt that as soon as I met Michael, that he did not look well. I was not surprised when he told me about himself. I actually felt it as soon as I saw him. I am concerned for his well being, and it would sadden me to work around him and his clients, therefore, I cannot. He might have been uncomfortable with my Biblical viewpoints on living in the healing that can come into a person's life through surrender to God's word.

You may share this with him, it is not meant to criticize him for his choices, it is for me to speak of my convictions. I will pray for his health. Thank you again for your time."

Needless to say, I was a bit dumbfounded, even though I live in an area not even twenty (20) miles from Pat Robertson’s Regent University (in the news of late for having 150 of it graduates recruited by the Bush administration and given positions in government agencies, including the Justice Department, instead of more qualified applicants with degrees from far better law schools – check out the Boston Globe story: http://www.boston.com/news/nation/articles
/2007/04/08/scandal_puts_spotlight_on_christian_law_school/?page=full).

In any event, I could not bit my tongue and let this shocking condemnation go un- answered. Trying to be calm, I responded with the following to this job interviewee:

"Thank you for your honesty and your wishes for my health. I am sorry that you do not want to work in my firm. However, I certainly respect your right to want a specific pay level and to hold your own religious views. Obviously, the latter does not mean I have to necessarily agree with your beliefs or live by them myself. I would further add that, actually, I feel that I am more "well" now than during the 37 years I spent in self-denial trying to convince myself that I was not really gay.

It may shock you, but I consider myself to be a Christian and I attend church fairly regularly. Moreover, I have done extensive reading of and about the Bible and how it came to be in its present form. I do not selectively choose which Bible passages to strictly construe to the harm of others, while ignoring countless others, including but not limited to the prohibitions against (1) judging others lest you be judged, and (2) bearing false witness against one's neighbors by knowingly disseminating fraudulent scientific "expert" opinion on gays as do Focus on the Family, Family Research Council, The Family Foundation, and other "Christian" organizations. My Christian belief may be very different than yours - and probably is far more frightening since it does not have nice little boxes one checks off to confirm in one's mind that they are "saved" - but, in my view, it requires an even stronger faith in God. Yes, I did have to leave the denomination of my baptism because of its viciousness toward gays and lesbians. But fortunately, I found a Christian denomination that does not presume that it knows all of God's plans, mysteries and intentions.

Please consider that the self-hatred and self-loathing induced by those with rigid religious views that reject advances in medical and mental health knowledge are incredibly destructive. The myth perpetuated by certain fundamentalist elements within religions -e.g., fundamentalists both among Islam and Christianity - that one's sexual orientation is a "choice" and something that it can be changed makes the pain all the greater to countless individuals. I knew two exceptional men who killed themselves when all their attempts to "change" failed. Check out this web page if you have not ever seen the actual positions of the leading medical and mental health associations in this country:
http://www.anythingbutstraight.com/learn/exopinion.html As one who spent 37 years trying to change, throwing myself into religion and daily prayer and daily church attendance, I understand how these two individuals felt and know just how much this pernicious myth can destroy people's lives. You might likewise read the column at this web address for a compelling description of what I consider to be a far too wide spread form of child abuse in this country:
http://rjr10036।typepad.com/proceed_at_your_own_risk/2006/09/every_so_once_i
.html

I wish you well in your future endeavors and hope you find a position that meets all of your requirements. I also hope that my thoughts may prompt you to ponder some of the issues I have raised."

If it had been published before my response, I would also included a reference to the April 10, 2007, New York Times article that discusses the evidence that increasingly shows that sexual orientation is biological and not a “choice” as is so disingenuously put out by “Christian” bigots who, apply the standard used on Don Imus, should be banned from the air waves: http://www.nytimes.com/2007/04/10/health/10gene.html?n=Top%2fReference%2fTimes%20Topics%2fPeople%2fW%2fWade%2c%20Nicholas&adxnnl=1&adxnnlx=1176572691-JzkC/4crNluqGV6zd4mrkA
Posted by Michael-in-Norfolk at Saturday, April 14, 2007 5 comments: 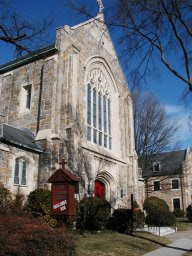 Also, ironically, one of my friends from my “summer life” growing, which will be described in more detail later, attends FLC and I will be going over to her house this afternoon. Tomorrow, I will have an “Easter lunch” with my youngest daughter, Victoria. Overall, it’s a good day so far.
Posted by Michael-in-Norfolk at Sunday, April 08, 2007 1 comment: