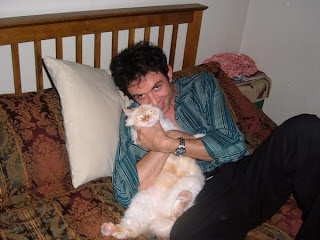 In the wake of the National Day of Silence, I have been thinking about today’s LGBT youth and how optimistic it makes me feel that so many individuals will have the courage to be who they truly are at such an earlier age than I did, and that they will have the opportunity to be open about who they love. As you will eventually figure out, I am a romantic at heart.

Along these lines, my boyfriend/partner went out of town yesterday evening and this morning I was truly missing him as I lay in bed alone (He’s in the picture at left with our crazed cat, Bella). One of my favorite things in the morning is to lie cuddled and spooned with him in the morning, just enjoying and savoring the feel of his skin and the warmth of his body against mine, as I feel like I want to utterly melt into him and become one with him. I could do this for hours and I think in some ways, this is most sensual and erotic thing a couple can do and experience together.

Sadly, it’s something I never felt with intensity when I was married, demonstrating, I guess, that no matter how very, very hard one tries to deny their true sexual orientation, emotionally a part of it can never be fully subdued or repressed. Hence, I can only speculate on the lack of full connectedness that the professional “ex-gays” must feel in their “forced” marriages, be it due to religious fervor, the desire to conform to family expectations, or, as I believe is the case with some, for a job and steady income paid by “Christian” Right organizations (i.e., ex-gay for pay).

I do believe a big part of what will change society’s view of LGBT people is for each of us to be open about ourselves and challenge the “Christian” Right lies that sexual orientation is a “choice” and/or just about sexual acts. The simple fact is that our brains are wired to have romantic love others of the same gender, plain and simple. I recently began attending a men’s group run by a psychologist friend that serves as a support group of sorts for men in mid-life who have undergone dramatic and emotional events in their lives – in my case coming out after 24 years of marriage and coming out professionally in the local legal community. The group has been interesting so far and, even though I am the only gay in the group, it’s been informative. Despite all our differences and varied pasts, we somehow connect and can identify with the past struggles and work at changing past behavior patterns that each of us is going through.

In fact, when I described my closeted teen age years, college experiences, and married past, and then my first sexual experience with another guy (brought on by alcohol and stress overload, and definitely not planned), one of the other guys made an amazing remark. He quickly spoke up and said how for the first time it all must have felt real to me because I was no longer playing a role. I admitted that it indeed had felt that way and left me to struggle for two years trying to decide what to do. Despite how much I cared for my wife when we were together, there was a connectedness and completeness that just wasn’t there (through no fault of my wife) compared to that one unplanned encounter during which I thought to myself “this is what I’ve always needed.” It was remarkable that a straight guy readily understood the emotion.

As the votes on the federal hate crimes legislation and EDNA approach, I hope all gays will be open to friends, family, and co-workers and urge them to contact their legislators in Congress (and the Whitehouse, since I fear “Dear Leader” to quote Pam Spaulding, may consider vetoing the bills if they pass Congress).
Posted by Michael-in-Norfolk at Saturday, April 21, 2007 1 comment:

Like people across the country, if not the entire world, I am shocked and saddened by the death and carnage that occurred at Virginia Tech on Monday. The senseless killings hit home, I guess, for several reasons.

First, the deaths of so many smart, young and talented people and the dedicated faculty members who lost their lives are a terrible loss not only to their families and Virginia Tech, but also the Commonwealth of Virginia and the entire country. Second, as a parent of three children, the youngest of which will be starting college in the fall, I can only imagine what the parents of the dead students are going through. It’s a parent’s worse nightmare come true – having nearly lost a child to meningitis seven years ago, I have experienced a sudden event that turn one’s world upside down. This event will no doubt haunt many parents sending their children off to college in the coming years. As a parent, one can never protect one’s children enough or try to all alleviate their unhappiness.

Third, I live in an area that sends hundreds of students to Virginia Tech – I keep scanning the list of the dead to make sure none of the children of friends or friends of my children appear. I cannot even count the number of Virginia Tech students my children and I collectively know. I continue to pray that no familiar name is yet to appear.

Lastly, as a Virginian this tragedy is a blot on the state’s name that will live on for many years to come – especially in light of Virginia’s pitiful gun control laws that make it so easy to obtain weapons. If it turns out that the identified shooter, Cho Seung-Hui, used extended ammunition clips, some of the carnage might have been avoided had the federal ban on automatic weapons not expired in 2004. It is also ironic that southwest Virginia where Virginia Tech is located is one of the political bastions in Virginia of those who oppose meaningful gun control laws. Perhaps this tragedy will wake up Virginians and others around the country to demand meaningful control laws.
Posted by Michael-in-Norfolk at Tuesday, April 17, 2007 No comments:

Paying Taxes to a Government that Keeps You Unequal

Richard Rothstein over at QueerSighted (http://www.queersighted.com/) had a good description of how I suspect many of us in the GBLT community feel some mornings. Having worked on my tax return a good part of the weekend so that I can pay my federal taxes and help support the government that currently fails to protect my equality and out right marginalizes my life, Richard’s comment hits home even more than most days:

“Some mornings, before I've even finished my coffee and reading the first news reports of the day, I feel exhaustion for no other reason than the fact that I'm a gay American. I wonder if my fellow citizens who spend their days campaigning and crusading to limit my civil rights - the civil rights that they themselves take for granted - ever consider the inhumanity and irrationality of what they do? And I wonder if the millions of Americans who stand by apathetically and allow this travesty to play out with each passing day ever consider the emotional anguish they are deliberately or carelessly causing to millions of children, teenagers and adults?

This weekend KETV Omaha has provided live coverage of the "Love Won Out," Focus on the Family conference intended to "curb homosexuality" and promote "the truth that change is possible for those who experience same-sex attractions," While this festival of self-loathing and monstrous bigotry plays out, Don Imus is fired for making a horribly tasteless and grossly inappropriate joke about a group of black women. But who cares about a bunch of fags? Obviously not any of our prominent civil rights crusaders.”

As Michael Signorile noted last week on his new blog site, The Gist (http://www.signorile2003.blogspot.com/) , unfortunately GLAAD seems to be asleep at the wheel when it comes to getting down in the trenches to battle to silence the homophobes who are regularly given a free platform to these merchants of hate and easily documented untruths. Oh well, I need to get back to work so I can pay more taxes to a government that treats me with contempt.
Posted by Michael-in-Norfolk at Monday, April 16, 2007 No comments: