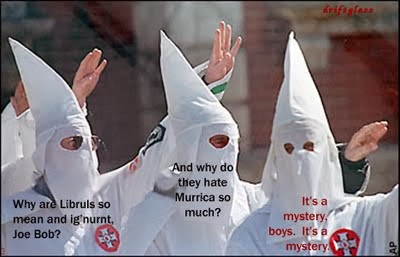 If those outside of Virginia want to know why Virginia continues to be the home of racist and homophobic laws and laws that deny that climate change is occurring, look no further than the Republican controlled House of Delegates where the embrace of ignorance, bigotry and religious extremism are de riguer.  With gerrymandered districts to protect them from election challenges, the GOP House members' main concern is kissing the ring of Victoria Cobb of The Family Foundation and embracing whatever batshitery is the current favorite effort to move backward in time of the Tea Party.  The Washington Post looks at the state of the House of Delegates under the GOP and the manner in which it is holding Virginia back from moving forward, not to mention the racism that motivates much of its actions.  Here are excerpts:

AFEW years ago, William J. Howell, the speaker of Virginia’s House of Delegates, said that newcomers to the state, such as immigrants, might not heed the “shared values we have in Virginia.” One hopes that one of those shared values is that children should not be punished for the mistakes of their parents. But Mr. Howell (R-Stafford) appears to have turned his back on that notion.

He and the GOP leadership in Virginia evidently remain intent on handicapping the blameless children of illegal immigrants. Even if undocumented students grow up in Virginia and graduate from a high school in the state, Republican leaders in Richmond insist that they pay out-of-state tuition rates at public colleges and universities, which are two or three times higher than the in-state levels.

Legislation that would allow these students to pay in-state rates recently cleared the Education Committee in the House of Delegates with broad bipartisan support; the vote on the bill was 19 to 3. Then Mr. Howell saw to it that the bill was sent to die in the Appropriations Committee, of all places.

In moral or economic terms, it is senseless and self-defeating to deny them the opportunity to fulfill their potential by making college prohibitively expensive.

Nonetheless, some Republicans say they oppose the bill — sponsored by Del. Thomas Davis Rust (R-Fairfax) — because it would enable undocumented students to take slots from native-born Virginians and legal immigrants. Theoretically, that’s true. However, the state has been expanding enrollment at colleges and universities, so the number of those denied a place in favor of an undocumented student is probably tiny.

Some Republican lawmakers, meeting in private, expressed concern that allowing the bill to come to a vote on the House floor would split the party and open the door to primary challenges of incumbents who voted for it. That may be true. It’s equally true that Republicans will squander any hope of reviving their low standing with Hispanic voters if they persist in slamming the door of opportunity in the faces of students whose only mistake was to have been born to undocumented parents.

And who would be leading the charge on such primary challenges?  Yep, Ms. Cobb and her legion of hate merchants with an assist from the Neanderthals of the Tea Party, most of whom are also religious extremists.  To move Virginia forward, the first step is to break the hold of The Family Foundation over the Virginia GOP.  A hate group designation and revocation of its tax-exempt status by the IRS would be a good place to start.

I can't believe Vicky is still at it. She was my nemesis in the 2006 amendment campaign. She hasn't developed any firmer grip on reality since.

Still I'm happy that it must suck to be her. To hear the relentless drumbeat of progress. To know, in some secret, quiet place that she and her ilk are doomed to suffer humiliating defeat.

We all should be wary of a repeat of Jonestown or the People's temple. Both we zealous flameouts and I don't doubt Vicky is capable of the same.