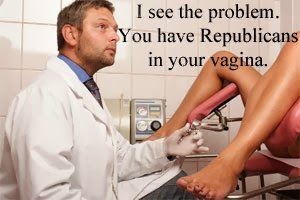 Virginia's forced ultrasound law earned now indicted Governor Bob McDonnell the nickname "Governor Ultrasound" and made Virginia look like a laughing stock on late night talk shows.  Today, a bill patroned by Mamie Locke, my state senator who gave the boyfriend and me a big hug when we met with her on EV's Day of Action last month, passed the Virginia Senate that would repeal last year's law which sought to override the decisions of physicians with the mandates of Republican members of the Virginia General Assembly beholden to the religious extremists at The Family Foundation.  Sadly, the bill will likely be killed in the GOP controlled House of Delegates which, when not devising ways to stigmatize and marginalize LGBT Virginians or to disenfranchise minority voters, wants to control women's wombs.  First this on point commentary from Blue Virginia:


This afternoon, the Virginia Senate passed a bill to repeal the mandatory ultrasound requirement that Republicans passed in 2012. Senate Democrats provided 19 of the 20 votes which produced a tie, broken by Democratic Lt. Gov. Ralph Northam.

SB 617, patroned by Senator Mamie Locke (D – Hampton), would repeal themandatory ultrasound requirement that Republicans passed in 2012. Under that law, women seeking an abortion must submit to an abdominal ultrasound — regardless of their wishes, and regardless of the wishes of their doctors.

“Let’s call the ultrasound mandate what it really is: a measure to shame, judge, and delay a woman’s access to the health care she seeks,” said Sen. Locke. “The state should not meddle in what ought to be a personal, private decision between a woman, her family, her faith, and her doctor. I am encouraged that members of the Senate saw the value in repealing this law. This is a great victory for the women of Virginia.”

“We need to think about the rights of individuals: of women, men and all of us. Because when one group us has their rights threatened, we all have our rights threatened,” said Sen. Favola (D-Arlington). "I'm glad my colleagues agreed and voted to protect women's rights."

“When an ultrasound is necessary, a doctor knows. There's no one on the floor, with the exception of the lieutenant governor, who's qualified to practice medicine,” saidSen. Ebbin (D-Alexandria). “This bill can be broken down to seven words: let doctors decide how to practice medicine.”


“The question of what is medically necessary should be decided by a physician, not by the General Assembly,” added Sen. Edwards (D-Roanoke). “Let's not practice medicine. Lets not have the hubris or the arrogance to tell physicians what they should do.”

Unfortunately, as the Richmond Times Dispatch notes, the bill is likely to be killed in the House of Delegates where Republicans who make tawdry whores look virtuous by comparison will do the bidding of The Family Foundation.  Here are excerpts:

The Senate vote for repeal is largely symbolic. Republicans hold two-thirds of the votes in the House of Delegates, which already has rejected bills to scrap the ultrasound requirement.

“We are absolutely thrilled to see the Virginia Senate take a strong stance for women’s health and rights and vote to pass this critical bill,” said Tarina Keene, executive director of NARAL Pro-Choice Virginia. “Virginia’s current mandatory ultrasound law is a gross invasion of women’s personal privacy and the doctor patient relationship.”

The GOP-dominated House of Delegates is expected to kill the Senate bill in subcommittee, preventing it from ever reaching Gov. Terry McAuliffe, a Democrat who supports repeal.

I personally believe that abortion should be safe and rare.  Common sense and scientifically based sex education could go a long way toward reducing the number of abortions not only in Virginia but nationwide.  However, ever effort to provide such reality based sex education is opposed by, you guessed it, The Family Foundation.  These foul hypocrites do not want abortions to occur, but block measures that would make abortion less prevalent.