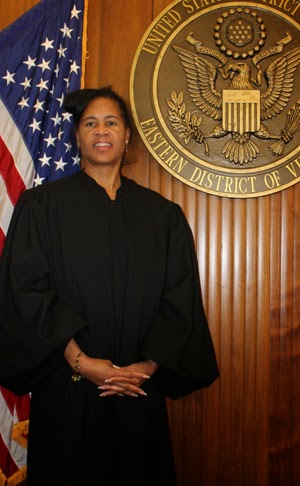 Some time after 5:10 PM today - the last time I logged in to Pacer, the website that allows registered subscribers to access federal court case files - Judge Wright Allen of the U.S. District Court for the Eastern District of Virginia filed her opinion in Bostic v. Rainey and  ruled that Virginia’s marriage ban violates the U.S. Constitution.  While the Order enjoined the Commonwealth of Virginia from enforcing Virginia's marriage ban, the injunction was stayed pending a likely appeal to the U.S. Court of Appeals for the Fourth Circuit.   The next shoe to drop in Virginia will be when the U.S. District Court for the Western District of Virginia rules in Harris v. Rainey.  As noted before, that ruling could potentially come at any time.  Having read all the briefs and the case law cited, I frankly do not know how Judge Wright Allen could have ruled in any other way.  Here are some highlights from the order portion of her opinion:

The Court finds Va. Const. Art. I, § 15-A, Va. Code §§ 20-45.2, 20-45.3, and any other Virginia law that bars same-sex marriage or prohibits Virginia's recognition of lawful same-sex marriages from other jurisdictions unconstitutional. These laws deny Plaintiffs their rights to due process and equal protection guaranteed under the Fourteenth Amendment of the United States Constitution.

The Court ENJOINS the Commonwealth from enforcing Sections 20-45.2 and 20-45.3 of the Virginia Code and Article I, § 15-A of the Virginia Constitution to the extent these laws prohibit a person from marrying another person of the same gender.

In accordance with the Supreme Court's issuance of a stay in Herbert v. Kitchen, and
consistent with the reasoning provided in Bishop, this Court stays execution of this injunction pending the final disposition of any appeal to the Fourth Circuit Court of Appeals.

As for Judge Wright Allen's analysis as to why Virginia's same sex marriage ban violates the U.S. Constitution, here are some excerpts:

The Equal Protection Clause of the Fourteenth Amendment provides that no state shall "deny to any person within its jurisdiction the equal protection of its laws." U.S. Const, amend. XIV, § 1. Just as the analysis regarding the claims involving substantive due process began, the evaluation of whether certain legislation violates the Equal Protection Clause commences with determining whether the challenged law interferes significantly with a fundamental right. If so, the legislation "cannot be upheld unless it is supported by sufficiently important state interests and is closely tailored to effectuate only those interests."

[E]ven without a finding that a fundamental right is implicated, the Marriage Laws fail under this Clause. The Equal Protection Clause "commands that no State shall 'deny to any person within its jurisdiction the equal protection of the laws,' which is essentially a direction that all persons similarly situated should be treated alike."

This recent embrace of "natural" procreation as the primary inspiration and purpose for Virginia's Marriage Laws is inconsistent with prior rationalizations for the laws. This purpose was effectively disavowed by the legislation itself, which declared that marriage should be limited to opposite-sex couples "whether or not they are reproductive in effect or motivation." Affirmation of Marriage Act, HB 751 (2004) (enacted).

A more just evaluation of the scope of Virginia's Marriage Laws at issue establishes that these laws impact Virginia's adult citizens who are in loving and committed relationships and want to be married under the laws of Virginia. The laws at issue target a subset (gay and lesbian individuals) who are similarly situated to Virginia's heterosexual individuals, and deprive that subset of the opportunity to marry.

Deference to Virginia's judgment on this question is unwarranted, because there are reasonable grounds to suspect "prejudice against discrete and insular minorities . . . which tends seriously to curtail the operation of those political processes ordinarily to be relied upon to protect minorities[.]"

This moral condemnation continues to manifest in Virginia in state-sanctioned activities.  The Virginia legislature has passed a law permitting adoption agencies to refuse adoptions based on the sexual orientation of the prospective parents. See Va. Code § 63.2-1709.3 (2014). Virginia's former Attorney General directed colleges and universities in the Commonwealth to eliminate protections that had been in place regarding '"sexual orientation,' 'gender identity,' 'gender expression,' or like classification" from the institutions' non-discrimination policies. Lustig Decl. Ex. J, at 1, ECF No. 26-15. This record alone gives rise to suspicions of prejudice
sufficient to decline to defer to the state on this matter.

Virginia's Marriage Laws fail to display a rational relationship to a legitimate purpose, and so must be viewed as constitutionally infirm under even the least onerous level of scrutiny. Accordingly, this Court need not address Plaintiffs' compelling arguments that the Laws should be subjected to heightened scrutiny.

Although steeped in a rich, tradition- and faith-based legacy, Virginia's Marriage Laws are an exercise of governmental power. For those who choose to marry, and for their children, Virginia's laws ensures that marriage provides profound legal, financial, and social benefits, and exacts serious legal, financial, and social obligations. The government's involvement in defining marriage, and in attaching benefits that accompany the institution, must withstand constitutional scrutiny. Laws that fail that scrutiny must fall despite the depth and legitimacy of the laws' religious heritage.

The Court is compelled to conclude that Virginia's Marriage Laws unconstitutionally deny Virginia's gay and lesbian citizens the fundamental freedom to choose to marry.  Government interests in perpetuating traditions, shielding state matters from federal interference, and favoring one model of parenting over others must yield to this country's cherished protections that ensure the exercise of the private choices of the individual citizen regarding love and family.

There is more, all of which calls out the motivation behind Virginia's marriage ban for what it is: anti-gay animus and religious based hatred towards gays.  Neither are enough to make a law or a state constitutional provision constitutional under the U. S. Constitution.  What makes the Court's ruling all the sweeter is that some of the hate and animus demonstrated by then state senator (and later Attorney General) Ken Cuccinelli and Del. Bob Marshall helped convince the court that impermissible animus was the true motivation behind Virginia's same sex marriage ban.  Karma can be a bitch - at least to those who are cruel and bigoted towards others.

Posted by Michael-in-Norfolk at Thursday, February 13, 2014