Yesterday evening before heading to dinner with my husband to be I attended a gathering of members of the Hampton Roads LGBT community and its straight allies to celebrate the striking down of Virginia's ban on same sex marriage.  While the City of Norfolk had offered use of the Half Moon Cruise terminal free of charge if the venue was not in use, the event ended up being held at Decorum Furniture's Norfolk location just down the street from my office.  The turn out was huge and I was struck that the crowd included a mix of young and old, black, white, Asian and Hispanic - many of whom I had never seen at an LGBT event before. To say that the atmosphere was joyous would be an understatement.  As icing on the cake, Lt. Governor Ralph Northam was in attendance as were my friends Tim Bostic and Tony London.  Some photos from the event are included in this post.

Two things struck me.  First, that the crowd which represented a cross section of the LGBT community was filed with hope on an amazing level.  While the case of Bostic v. Rainey will go on to the 4th Circuit Court of Appeals, the District Court ruling fostered a real sense of optimism that gays in Virginia are perhaps finally moving out of a scorned second class citizenship.  Moreover, for those who are married there will be real tangible benefits from state recognition of same sex marriage in terms of inheritance rights, qualification for spousal benefits and health care under a spouse's policies, and the elimination of a daily message that one is inferior because the state will not recognize one's relationship with a life partner.

The second thing that struck me is the in my view immoral character of the Christofascists who are bemoaning the Court's ruling.  Nothing has been taken from them in terms of their daily lives other than the ability to make others inferior citizens.  Their ability to worship as they wish and believe as they wish is utterly unchanged.  The only thing they have lost is an ability to punish and demean through the civil laws those who do not subscribe to their hate and fear based religious beliefs.   To me, this demonstrates a real moral sickness and the need to be able to demean and look down on others is very much akin to the behavior of poor whites who supported segregation because they needed to be able to subordinate blacks in order to feel superior about themselves.  In one article I read a statement by a hate merchant that the ruling was making conservative Christians into the modern day segregationist.  Unknowingly, the individual was right: the Christofascists display the same sickness and moral bankruptcy that was displayed by segregationist that refused to see the equal humanity of blacks.  And then, as now, the Bible was used to justify hate and bigotry. 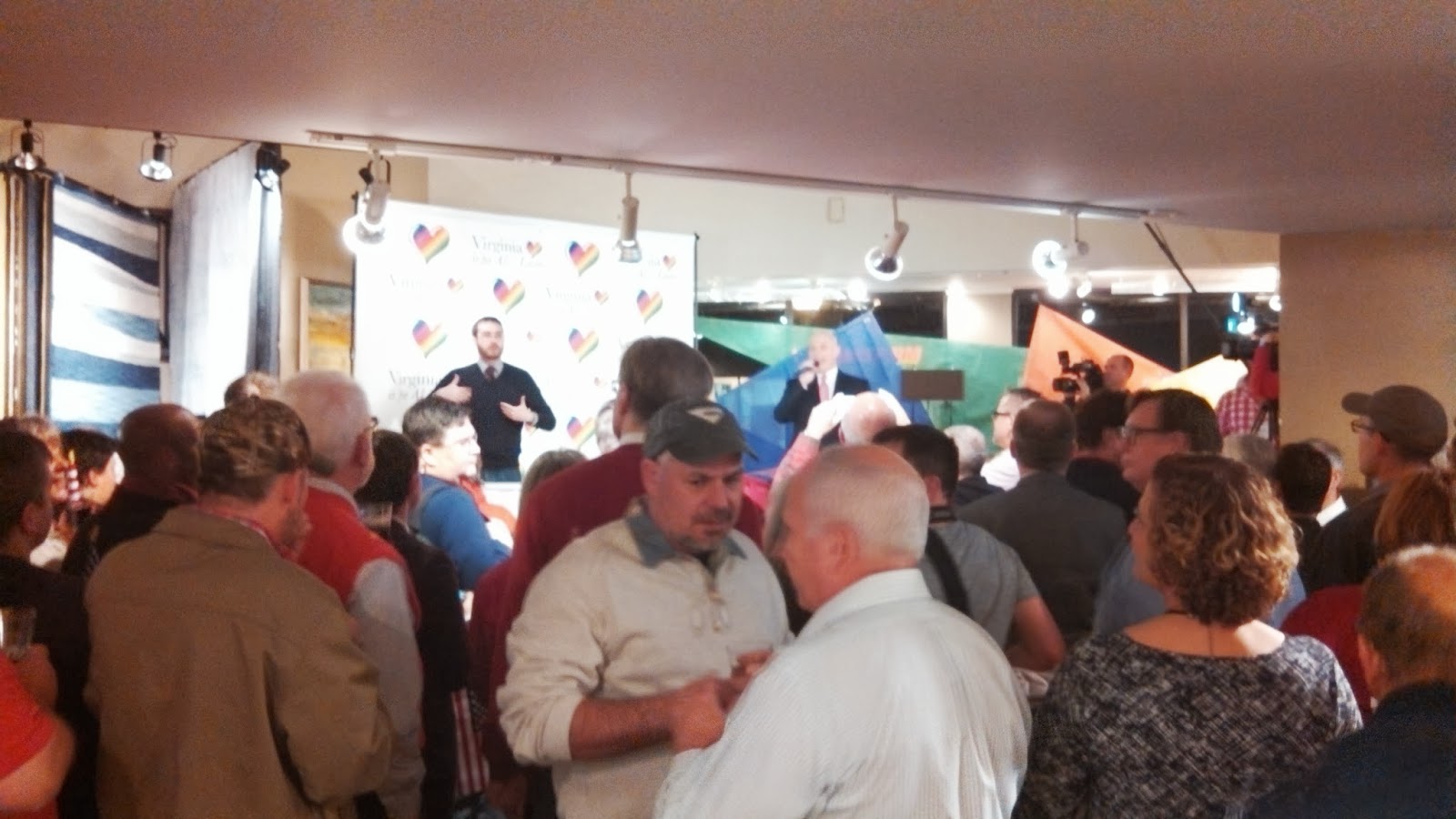 Is Virginia changing?  I truly believe so - at least outside of the rural areas and Christofascist circles that remain stuck in a 1950's, Deliverance mind set.  After the event in Norfolk, the boyfriend and I joined friends at the Hampton Yacht Club for a festive dinner event which included another gay couple who are now club members.  Total acceptance and congratulations on the marriage case victory were the consistent experience.  There was a time when such would not have been the case.  Thankfully, Hampton and much of Virginia are ready for a new day.

Only addition I would add was that the gathering was made up of both LGBT and non-LGBT folks celebrating the decision.