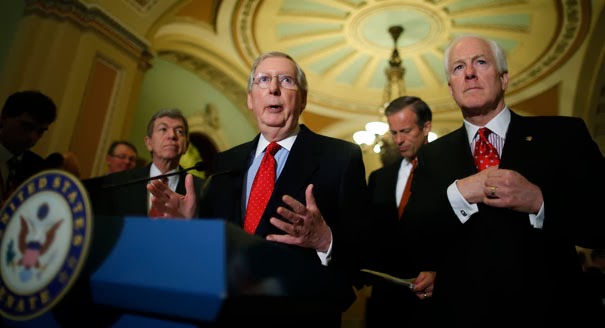 A piece in Politico looks at the surging confidence in the Republican Party that it will take control of the U.S. Senate in the 2014 mid-term elections.  Before liberals panic and start their emigration plans, it is needful to remember that the Republicans were confident that they would take control of the Senate in 2010 and 2012 and many were convinced that Mitt Romney would win the presidency.  That said, the GOP confidence - whether anchored in reality or not - should make Democrats and Independents who find the thought of the Christofascists and Tea Party holding control of the Senate nothing short of terrifying realize that they need to get involved, start actively supporting Democrat candidates so as to make sure 2014 is another bad year for the GOP.  Here in Virginia, I think GOP visions of Ed Gillespie beating Mark Warner are likely highly unrealistic.  Nonetheless, LGBT Virginians need to step up their political game given that Gillespie is a strident opponent of marriage equality.  Here are highlights from the Politico piece:

At an annual gathering of Republican bigwigs in Florida a year ago, a top GOP strategist was chided after he gave a presentation about how his party would win the Senate in 2014, including a handout that blared “MAJORITY” in red.

Fast forward to early this month, when the annual event took place again at the same posh Palm Beach resort. Far from preaching caution, many of the 400 donors in attendance openly mused about what a Republican Senate would bring, and Collins was the one trying to keep expectations in check.

Emboldened by the president’s weak poll numbers, the botched Obamacare rollout and a still-sputtering economy, GOP donors and operatives are increasingly bullish about their prospects in the midterm election — most of all capturing the Senate. Seats that a year ago looked like sure bets for Democrats now have the makings of real races — in states such as Michigan, Virginia, and, if former Republican Sen. Scott Brown runs, New Hampshire.


No one is saying that the party has solved its underlying problems — deep distrust between the establishment and tea party wings, and the disconnect with young and minority voters that was on display in 2012. And Republicans were similarly optimistic in 2010 and 2012 about retaking the Senate until poor candidates blew winnable races.

Even with the improved environment this year, the party’s chances are still roughly 50-50, according to several election handicappers. And there is concern that contentious primaries — in states such as Georgia, Iowa, Alaska and North Carolina — will again yield nominees who can’t win a general election.

“While the mood has changed, we still have significant work to bring that about,” said NRSC Chairman Jerry Moran, a senator from Kansas.

“We could still blow it and end up hurting ourselves in some way,” added Collins. “But after last year — a rough fundraising environment, the shutdown and disagreements on the right — now people from all sides are starting to come around. … We’ve just got to go out and earn it.”

Democrats say Republican candidates haven’t put up the kind of eye-popping fundraising numbers that back up the rhetoric about a party on the march. They also caution that the election landscape is too unsettled to forecast big GOP gains; it remains to be seen whether Republican candidates in key battlegrounds such as Arkansas, Louisiana and North Carolina have what it takes to unseat incumbents.


“This is exactly what they said two years ago, and once again Republican mentality and reality are two very different things,” said Matt Canter, deputy executive director of the Democratic Senatorial Campaign Committee. “The additional problem for Republicans this time is that voters understand that a Senate bought and paid for by the Koch brothers is not one that is good for their family.”

An arguably bigger moment came when Ed Gillespie began exploring a run in Virginia against Democratic Sen. Mark Warner. The former Republican National Committee chairman, who cofounded American Crossroads, is well-known and respected among donors and strategists. Though he remains a considerable underdog against Warner, the fact that Gillespie believed the national environment is favorable enough to take on a popular, well-funded Democratic incumbent sent a strong signal to others in the GOP, Berenson said.

It goes without saying that the husband to be and I will be actively supporting Mark Warner and other Democratic candidates against the anti-gay, pro-Christofascist/Tea Party GOP candidates.  We will probably host fundraisers like we did for Virginia Attorney General Mark Herring last year.