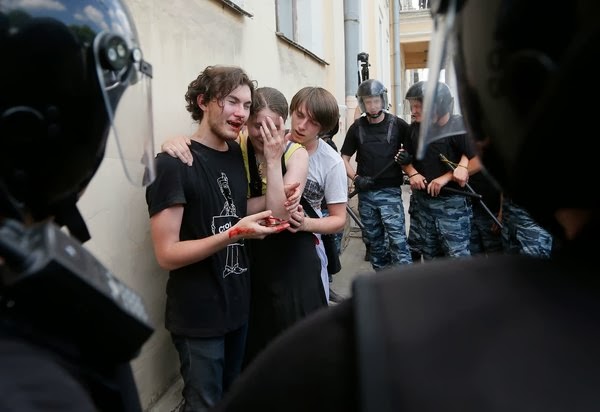 This blog in a recent post noted the recent op-ed in the Washington Post entitled, “The U.S. hypocrisy over Russia’s anti-gay laws,” authored by Yale Law professors Ian Ayres and William Eskridge which tried to argue that because eight U.S. states still have so-called “No Promo Homo” laws, Americans who are criticizing Russia and its anti-gay laws are hypocrites.   Yes, it is pretty sad that such laws still exist on the books anywhere in America (most are not surprisingly in the Deep South), but the reach of these laws is nothing compared to the impact of the laws in Russia, not to mention the blind eye Russian police are turn to vigilante violence against gay Russians.  A column in Slate debunks the argument made in the Washington Post op-ed.  Here are excerpts:

In the piece, Ayres and Eskridge note that eight U.S. states still have so-called “No Promo Homo” laws, which forbid the positive portrayal of homosexuality in public schools. Because these eight states still enforce homophobia in the classroom, the authors argue, Americans really have no right to criticize Russia and should instead focus on repealing their own backward statutes. “As things stand,” Ayres and Eskridge write, “one could imagine Putin responding to U.S. criticism by saying: ‘You hypocrite, first take the plank out of your own eye.’ ”

There is an irritating strain of soft-core cultural relativism that runs through this op-ed, but the bigger problem is the sheer inaccuracy of the central comparison. “No Promo Homo” statutes apply exclusively to public school classrooms, and their reach extends only to the hours of the school day. A gay student in Texas can still promote gay rights, read pro-gay blogs, write pro-gay tweets, and march for equality on her own time with impunity. That’s what the First Amendment is for. But if someone in Russia did such things, she would be arrested, fined, and possibly imprisoned. “No Promo Homo” statutes aim to keep homosexuality out of the classroom; Russia’s new law aims to keep homosexuality out of public discussion altogether—and to keep gay people themselves hidden, segregated, and muffled.

The legal repercussions of the Russian law, moreover, tell only part of the story. As a recent study published in Harvard University’s Health and Human Rights journal confirms, the symbolic bigotry of Putin’s homophobia stretches deep into Russian culture, indicating to homophobes that they can beat, rape, torture, and murder gay people with no consequence. There’s simply no analog to this horrifying outbreak of anti-gay violence in the United States.

Ayres and Eskridge probably wrote their op-ed in good faith: They’re clearly disgusted by America’s own codified bigotry and hoped to seize on Sochi fever to draw attention to their cause. But most Americans are sophisticated enough to direct their ire at Russia’s homophobia without forgiving or forgetting about their own country’s ills. The United States undoubtedly has a checkered track record when it comes to gay rights, and many parts of the country remain inhospitable—even somewhat dangerous—for openly gay people. We needn’t overlook another country’s vicious homophobia merely because some of our states remain lodged in a bygone era of bigotry.

Let's be clear.  What is happening to gays in Russia sickens me and I have only contempt for Putin, his thugs, and the leaders of the Russian Orthodox Church who are encouraging the anti-gay violence.  Indeed, it makes me want to open out home to any Russia gay who could escape the bigoted hell hole known as Russia.