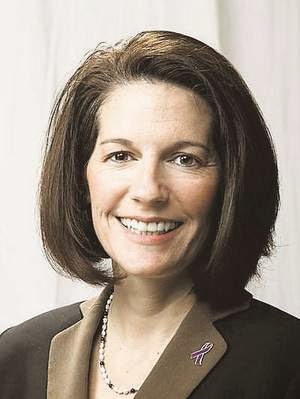 Virginia Attorney General has been viciously attacked for ceasing his office's defense of Virginia's animus based Marshall-Newman Amendment.  Now, Herring has been joined by Nevada Attorney General Catherine Masto (pictured at right) has filed a motion with the Ninth Circuit Court of Appeals, withdrawing her defense of the marriage equality lawsuit against the state.  And get this, the Republican governor of Nevada concurs with the move. Why?  Because based on new case law she/he can no longer make a good faith defense of the anti-gay marriage amendment. It is safe to expect that Masto will be pilloried by the Christofascists and their whores in the GOP much as has happened with Herring. These "godly folk" would rather that attorneys general lie to the courts and mis-cite case law rather than uphold the United States Constitution.  Here are highlights from the Salt Lake Tribune on this breaking news development:

Nevada is withdrawing its efforts to uphold the state’s gay marriage ban.  Attorney General Catherine Corte Masto filed a motion Monday to withdraw the state’s legal arguments in a case pending before the 9th U.S. Circuit Court of Appeals.


Republican Gov. Brian Sandoval says he agrees with the move, saying it’s clear the state’s arguments supporting the ban are no longer defensible in court.

The decision means Nevada will not argue to uphold the state’s constitutional prohibition against same-sex marriage that voters passed in 2002.

Eight same sex couple sued the state, arguing the law is unconstitutional.  Nevada lawmakers last year took the first step toward repealing that law. If legislators approve Senate Joint Resolution 13 again next year, it would go to voters on the 2016 ballot.

In earlier posts I had predicted that Masto would likely make this move.  Her action lends further credence to Mark Herring's decision which cited the same case law as that which forced Masto to withdraw Nevada's defense of that state's same sex marriage ban.  Lambda Legal had this to say via a press release:

“In the wake of the Ninth Circuit ruling in SmithKline Beecham v. Abbott Laboratories, the Governor has recognized that the writing is on the wall, and that arguments seeking to perpetuate discrimination are becoming extremely difficult to justify. Denying marriage to same-sex couples serves no legitimate state interest and is intended solely to perpetuate discrimination. As the Governor himself recognized, the heightened scrutiny standard that the Ninth Circuit’s SmithKline ruling now requires be applied to discriminatory classifications based on sexual orientation renders arguments supporting the marriage ban no longer tenable, and the Governor frankly made the only call he could.”

The lawsuit argues that barring same-sex couples from marriage violates the Due Process and Equal Protection Clauses of the U.S. Constitution. A U.S. District Court judge granted Nevada Gov. Brian Sandoval’s motion to dismiss the lawsuit in November 2012, and Lambda Legal appealed the decision to the Ninth Circuit. The State submitted its brief supporting the marriage ban to the Ninth Circuit on the same day as the Court’s ruling in SmithKline.

With this development it is within the realm of the possible that same sex marriage bans in the 9th Circuit and elsewhere will begin to fall like dominoes.   Expect plenty of flying spittle and rants and shrieks from the Christofascists.