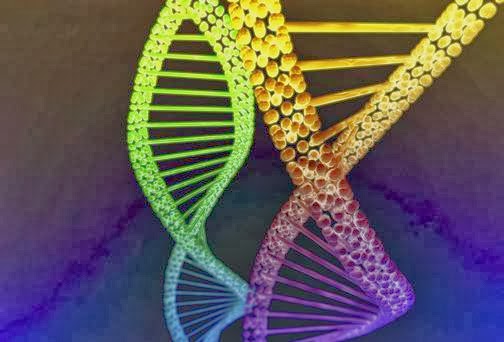 Once again science and modern knowledge are proving to be the worse enemy of the Christofascists who not only maintain that the earth is only 6,000 years old, but who also maintain that being gay is a "choice" and that homosexuality can be "cured."  Ask anyone gay if they chose to be attracted to members of the same sex and they will tell you no and that it's no more of a choice than being right handed or left handed or having blue eyes.  It merely is a part of you.  Now a new study has found DNA strands that influence male homosexuality and which, teamed with other factors prove that being gay is not a choice.  The bottom line: another Christofascist myth - like the claim that Adam and Eve were historic persons - bites the dust.  Here are highlights from a piece in The Independent:

In the most comprehensive study of its kind, Dr Michael Bailey, of Northwestern University, has been studying 400 sets of twins to determine if some men are genetically pre-disposed to being gay.
The study found that gay men shared genetic signatures on part of the X chromosome.

Dr Bailey said: "Sexual orientation has nothing to do with choice. Our findings suggest there may be genes at play – we found evidence for two sets that affect whether a man is gay or straight.
"But it is not completely determinative; there are certainly other environmental factors involved. The study shows that there are genes involved in male sexual orientation.

Dr Alan Sanders, associate Professor of Psychiatry at Northwestern University, who led the study, said, "We don't think genetics is the whole story. It's not. We have a gene that contributes to homosexuality but you could say it is linked to heterosexuality. It is the variation."

Last year Canadian scientists found that the more older male siblings a man has, the greater chance he will be gay.    They believe that the immune response produced by a pregnant mother increases with each son, increasing the odds of producing more feminine traits in the developing brain of the foetus. Each older brother raised the odds that a man was gay by one-third. Interestingly, no similar genes have been discovered which influence female homosexuality.

Richard Lane, of Stonewall, said that while studies into the origins of homosexuality have yet to produce firm evidence, they do indicate a biological root.

He said: "The thing that's consistent across all of them is that they all point to sexual orientation being something fundamental to a person rather than the lifestyle choice some opponents of equality repeatedly suggest."

It goes without saying that the ignorance embracing Christofascists and their political whores in the GOP will continue to ignore scientific knowledge.   It is frightening that these people wear ignorance on their sleeves as a badge of honor.  They have no place in decent society.