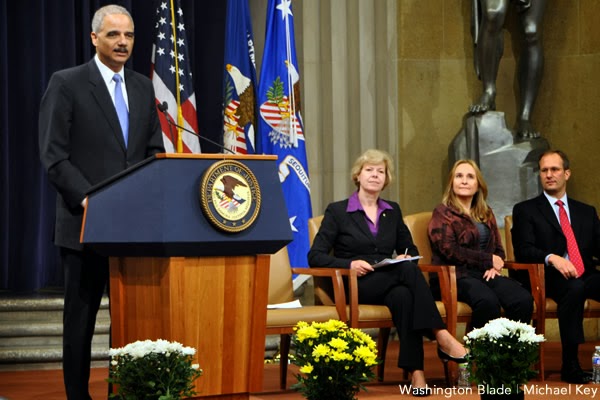 In yet another move to bring married same sex couples to the same level in legal rights as heterosexual couples, Attorney General Eric Holder has announced that  the Department of Justice will be extending additional federal rights to married same sex couples.  The move is consistent with legal equality for all married couples but will not doubt further rankle the hate merchants of the Christofacists and trigger batshitery from their political whores in the Republican Party.  The Washington Blade looks at this development. Here are excerpts:

[T]he Justice Department will issue a memorandum on Monday to outline the changes, which will bring the department into compliance with the Supreme Court’s decision against the Defense of Marriage Act.

“And yet, as all-important as the fight against racial discrimination was then, and remains today, know this: my commitment to confronting discrimination based on sexual orientation or gender identity runs just as deep,”  . . . . “Just like during the civil rights movement of the 1960s, the stakes involved in this generation’s struggle for LGBT equality could not be higher.”

Each of the changes is related to the way the Justice Department handles recognition of married same-sex couples. They range from rights in civil and criminal cases, rights as inmates and access to benefits programs:

• The Justice Department will recognize that same-sex spouses of individuals involved in civil and criminal cases have the same legal rights as straight married couples, including the right to decline to give testimony that might incriminate a spouse.
This new rule applies in non-marriage equality states. The government won’t object to couples in same-sex marriages invoking this right if they marry in another state, but their current jurisdiction doesn’t recognize their union.

• Federal inmates in same-sex marriages will be entitled to the same rights and privileges as inmates in opposite-sex marriages. These rights include spousal visitation; inmate furloughs to be present during a crisis involving a spouse; escorted trips to attend a spouse’s funeral; correspondence with a spouse; and compassionate release or reduction in sentence if an inmate’s spouse is incapacitated.

• The Justice Department will recognize same-sex couples for the purposes of a number of benefits programs it administers, such as the Radiation Exposure Compensation Program and the September 11th Victim Compensation Fund.

Also among these programs is the Public Safety Officers’ Benefits Program, which provides death benefits to surviving spouses of public safety officers, such as law enforcement officers and firefighters, who suffer catastrophic or fatal injuries while on duty.

The Justice Department has coordinated the effort across the Obama administration to ensure married same-sex couples have the same rights and benefits under federal law as opposite sex couples in the wake of the DOMA decision. The various departments and agencies announced changes in policies since that time.

The New York Times has coverage here.  The Christofascist goal to keep LGBT citizens inferior under the law is slowly but steadily being destroyed.  Its total destruction cannot come soon enough, especially in anti-gay states like Virginia.
Posted by Michael-in-Norfolk at Sunday, February 09, 2014