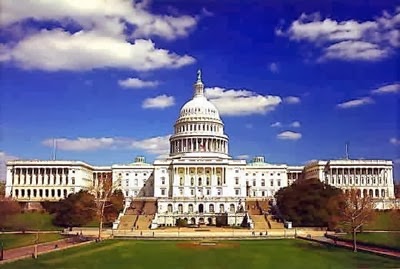 By a narrow margin the U.S. House of Representatives approved an increase in the United States' debt limit without imposed conditions suggesting that at least a minority of GOP House members learned at least something from last year's government shut down.  Far too many members of the House GOP proved too spineless to challenge the demagogues and saboteurs of the GOP's Christofascist and Tea Party base.  It would be nice if this vote offered evidence that the GOP is steering back towards sanity, but that is probably too much to be hoped for.  Here are highlights from the New York Times:

WASHINGTON — Ending three years of brinkmanship in which the threat of a devastating default on the nation’s debt was used to wring conservative concessions from President Obama, the House on Tuesday voted to raise the government’s borrowing limit until March 2015, without any conditions.

The vote — 221 to 201 — relied almost entirely on Democrats in the Republican-controlled House to carry the measure and represented the first debt ceiling increase since 2009 that was not attached to other legislation. Only 28 Republicans voted yes, and only two Democrats voted no.

Simply by holding the vote, Speaker John A. Boehner of Ohio effectively ended a three-year Tea Party-inspired era of budget showdowns that had raised the threat of default and government shutdowns, rattled economic confidence and brought serious scrutiny from other nations questioning Washington’s ability to govern. In the process, though, Mr. Boehner also set off a series of reprisals from fellow Republican congressmen and outside groups that showcased the party’s deep internal divisions.

“He gave the president exactly what he wanted, which is exactly what the Republican Party said we did not want,” said a Republican representative, Tim Huelskamp of Kansas, who last year unsuccessfully tried to rally enough support to derail Mr. Boehner’s re-election as speaker. “It’s going to really demoralize the base.”

The vote was a victory for President Obama, Democrats and those Senate Republicans who have argued that spending money for previously incurred obligations was essential for the financial standing of the federal government.

But outside Republican groups were sharply critical of the speaker. Both the Club for Growth and Heritage Action for America, for example, had put out a “key vote” alert urging members to vote against the measure.

Mr. Boehner stunned House Republicans on Tuesday morning when he dropped a package that would have tied the debt ceiling increase to a repeal of cuts to military retirement pensions that had been approved in December and announced he would put a “clean” debt ceiling increase up for a vote.

Enough Republicans had balked at that package when it was presented Monday night to convince the speaker he had no choice but to turn to the Democratic minority.

For Mr. Boehner it was a potentially momentous decision. Conservative activists, including the Tea Party Patriots, FreedomWorks, L. Brent Bozell’s ForAmerica and commentators on the website RedState.com are all circulating petitions to end Mr. Boehner’s speakership.

I hold no love whatsoever for Boehner, but thankfully he grew a partial spine and stood up to the lunatics of the GOP.
Posted by Michael-in-Norfolk at Tuesday, February 11, 2014