The Next Step For Marriage Equality in Virginia 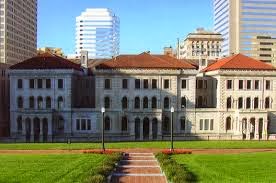 While it is uncertain whether or not Norfolk Clerk of Court George Schaefer will appeal the U. S. District Court ruling in Bostic v. Rainey, it is a pretty safe assumption that Prince William County Clerk of Court Michele McQuigg will do so inasmuch as she is represented by the Christoascist Alliance Defending Freedom, formerly known as the Alliance Defense Fund ("ADF").  The good news is that to date, ADF hasn't won any of the lawsuits in which it has been involved and on occasion, the group's extremism and insane witnesses have probably motivated courts to rule against whatever ADF is advocating for.  If an appeal is forthcoming, the next stop in the litigation will be the U.S. Court of Appeals for the Fourth Circuit in Richmond, Virginia (see photo above) which sits across from the Virginia Capitol.  Historically, the 4th Circuit has been one of the more conservative Courts of Appeal.  However, more recent appointments to the Court may make it more receptive to affirming the District Court ruling.  Here are some highlights from a Virginian Pilot piece on the Court:

With Virginia's gay marriage ban overturned, the legal fight over same-sex unions in that state goes to a court that has shifted to the left since President Barack Obama's election.

It's no accident that the state has become a key testing ground for federal judges' willingness to embrace same-sex marriage after last year's strongly worded pro-gay rights ruling by the Supreme Court. Judges appointed by Democratic presidents have a 10-5 edge over Republicans on the Richmond-based 4th U.S. Circuit Court of Appeals, formerly among the nation's most conservative appeals courts.

Nationally, three other federal appeals courts will soon take up the right of same-sex couples to marry, too, in Ohio, Colorado and California. The San Francisco-based 9th circuit is dominated by judges appointed by Democratic presidents. The Denver-based court, home of the 10th circuit, has shifted from a Republican advantage to an even split between the parties, while the 6th circuit, based in Cincinnati, remains relatively unchanged in favor of Republicans during Obama's tenure.

Jon Davidson of the gay rights group Lambda Legal said the "very dramatic" shift in the 4th circuit under Obama was an important reason behind the decision to sue for marriage rights in Virginia, which also twice voted for Obama.

Five federal district judges have issued pro-gay marriage rulings since the Supreme Court's decision in Windsor v. U.S. in June that struck down part of the federal anti-gay marriage law. Three of those judges are Obama appointees, one was named by Democratic President Bill Clinton and the other by Republican President George H.W. Bush.

Nancy Leong, a University of Denver law professor who is closely following the gay marriage issue at the 10th circuit, said the lineup of judges who have ruled so far conforms to general expectations.

Theodore Olson, half of the high-powered legal team representing two Virginia couples in the case decided Thursday, said he is confident about the outcome in the appeals courts "irrespective of the composition of any court. These arguments are so compelling...and the arguments presented against marriage equality are so weak."

The issue ultimately is headed to the Supreme Court. When and from which state are not clear.

The justices are more likely to step into a case when a federal court has struck down a state constitutional provision, as has happened in Kentucky, Oklahoma, Utah and Virginia. The Kentucky case involves only the state's recognition of legal same-sex weddings from elsewhere.

Obviously, it will be interesting to watch how things proceed.  In some ways it is appropriate that religious extremists from ADF will be defending the Marshall-Newman Amendment which was designed and deceptively marketed by religious extremists and hate merchants at The Family Foundation and their allies in the Virginia GOP.