The Insane Panicof Homophobes in the Locker Room! 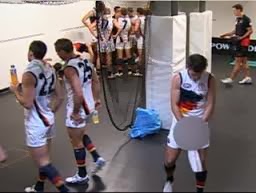 With the Michael Sam's announcement that he is a proud gay man, we are once again seeing more of the mindless panic of homophobes - many of which strike me as none too confident in their own sexuality - at the thought that they might be in the same locker room as a gay man who, oh the horrors, might see them naked.  Frank Bruni has a column in the New York Times that underscores the ridiculousness of such idiotic panic not the least because these homophobic cretins have been sharing locker rooms with and showering in front of gays for most of their lives.  They simply did not know it.  And then there is the reality that many of these idiots might not even meet the standards of self-respecting gay men.  I am often struck how some of the least attractive straight men worry about gays looking at them or making a pass.  Maybe in their dreams but not in the real world.  Here are highlights from Bruni's column:

A news flash for every straight man out there: You’ve been naked in front of a gay man.

In fact you’ve been naked, over the course of your life, in front of many gay men, at least if you have more than a few years on you. And here you are — uninjured, uncorrupted, intact. The earth still spins. The sun rises and sets.

Maybe it was in gym class, long ago. Maybe at the health club more recently. Or maybe when you played sports at the high school level, the college level, later on. Whether we gay guys are one in 10 or one in 25, it’s a matter of chance: At some point, one of us was within eyeshot when you stripped down.

And you know what? He probably wasn’t checking you out. He certainly wasn’t beaming special gay-conversion gamma rays at you. That’s why you weren’t aware of his presence and didn’t immediately go out and buy a more expensive moisturizer and a disc of Judy Garland’s greatest hits. His purpose mirrored yours. He was changing clothes and showering. It’s a locker room, for heaven’s sake. Not last call at the Rawhide.

On Sunday evening, in a story in The Times by John Branch and on ESPN, a college football star named Michael Sam came out. Because Sam is almost certain to be drafted, he could soon be the first openly gay active player in the National Football League — in any of the four major professional sports in the United States.

Most reactions from the sports world were hugely positive, even inspirational.  Some were not.

“It’d chemically imbalance an N.F.L. locker room,” an N.F.L. personnel assistant, speaking anonymously, said to Sports Illustrated. I think steroids, Adderall and painkillers have already done a pretty thorough job of that, and on the evidence of his comment, they’ve addled minds in the process.
Sports Illustrated quoted an unnamed assistant coach who also brought up the fabled sanctum of Tinactin and testosterone. “There’s nothing more sensitive than the heartbeat of the locker room,” he said. “If you knowingly bring someone in there with that sexual orientation, how are the other guys going to deal with it?”

To his question, a few of my own: When did the locker room become such a delicate ecosystem? Is it inhabited by athletes or orchids? And how is it that gladiators who don’t flinch when a 300-pound mountain of flesh in shoulder pads comes roaring toward them start to quiver at the thought of a homosexual under a nearby nozzle? They may be physical giants, but at least a few of them are psychological pipsqueaks.

It’s just that those gay guys didn’t or haven’t identified themselves. Why would doing so make them a greater threat? Wouldn’t an openly gay athlete have a special investment in proving that there’s zero to worry about?

Michael Sam proved as much at the University of Missouri, where teammates learned of his sexual orientation before their most recent season. They finished 12-2, and are publicly praising him so far. Nothing about trembling or cowering in the showers.

The person who raises that fear, Amaechi said, “is a bigot finally falling over the cliff and grasping for any straw that might keep their purchase. When every rational argument is gone, you go with that.”