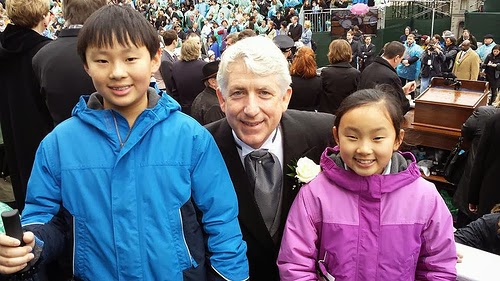 We have heard incessant whining and spittle flecked rage from the self-appointed guardians of morality in the Christofascist camp of the Republican Party of Virginia since Mark Herring made his decision to cease the defense of Virginia's hate and animus based Marshall-Newman Amendment.  In my view, these smug, self-anointed folks are perhaps among the most immoral of anyone in Virginia.  The are best known by the hatred and contempt that they show towards nearly everyone but those who think like them and look like them.  Gays may be their favored targets of hate and bigotry - always purported in a defense of "Biblical values" - but we are hardly alone.  Blacks, non-Christians, Hispanics and many others are treated with loathing by the lily white folks at The Family Foundation and its affiliates across Virginia.  The Richmond Times Dispatch has a column today that diplomatically takes these folks to task and makes the case where not only is Mark Herring on sound legal ground (my February VEER Magizine will focus on this at length) but also sound moral ground.  Here are highlights:


I applaud Attorney General Mark Herring’s refusal to defend Virginia’s ban on same-sex marriage. It strikes me, as he recently argued in the Richmond Times-Dispatch, that he is on solid legal footing. But more importantly, as a person of faith, it strikes me he is on solid moral footing.

I do not feel abandoned by our attorney general; rather, I feel encouraged. Many have despaired that the attorney general’s decision is informed by politics and the moral relativism of our age. I wonder, by contrast, if Herring’s decision is an active expression of God’s deep yearning for justice. I wonder if this is God attempting to break through the din, seeking to be part of the conversation.

I am mindful that fellow Christians have condemned his actions based on their Biblically informed views of marriage and same-sex relations.

If one is inclined to take the Bible at face value, Christ never spoke to the issue of same-sex relations, whereas his followers attempted to speak for him. It strikes me that this is significant.

When such debates are engendered, they make me think of Italian rhetorician Giambattista Vico (1668-1744); and particularly so those debates informed by competing Bible verses. I have similar thoughts when fellow Christians suggest the Bible is the infallible word of God.

I have great regard for the Bible as a sacred text. I consider the Bible to be a “library of books” written by a variety of authors from different periods of history, filtered by numerous translations, and full of often contradictory dictums. Furthermore, human fingerprints are ubiquitous. Accordingly, discerning the “truth” of the Bible takes prayer, reflection and scholarship. The Bible, even with great consideration, is consistently confounding.


I believe in a living God, not one locked in time and history. In the tradition of theologians Pierre Teilhard de Chardin and Thomas Berry, I believe in an evolving creation story, one in which God’s “truth” is still being revealed — a creation story in which we are a participants. To me this is informed by a God that longs to engage us and to pull us forward — not entropy informed by contemporary cultural and moral relativism.

By extension, I believe the increasing national support of same-sex marriage reflects God’s love of justice, as God calls us in an ever-changing world to “respect the dignity of every human being.”

She went on to say, “To do less is effectively to repudiate our membership in the human community. No one of God’s children is worth less or more than another; none is to be discriminated against because of the way in which she or he has been created.”


Would that the Christofascists would open their eyes to these truths.
Posted by Michael-in-Norfolk at Sunday, February 09, 2014