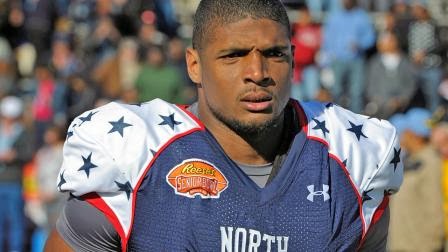 Someone had to be the first to do it and now Michael Sam (pictured above), an All-American defensive lineman from the University of Missouri, has revealed that he's gay.  In fact, he has stated that "I'm an openly, proud gay man."  Given his outstanding record as a college player, he should be a high draft choice and he has the possibility he could be the first openly gay player drafted by the National Football League.  Moreover, should he not fare well in the draft, the NFL will have a hard time proving that it is not the bastion of homophobia and anti-gay hatred that some allege.  Obviously, it will be interesting to see if the NFL steps and proves that it is supportive to all players, gay or straight.  Bleacher Report.com has details.  Here are excerpts:

One of the last barriers of bigotry in all of professional sports will soon fall: Former Missouri star defensive end Michael Sam, an All-American and the SEC Defensive Player of the Year, has come out as gay.

"I came to tell the world that I'm an openly, proud gay man," he told Chris Connelly of ESPN's Outside The Lines Sunday night.

“Michael has shown great courage in taking this step and not only do we support him, we are incredibly grateful. His decision to welcome us all into his world as he embarks upon a professional NFL career is an honorable one. This moment will resonate in a unique and important way for countless people, particularly LGBT youth,” said former Baltimore Raven and human rights activist Brendon Ayanbadejo . . .

One general manager told Bleacher Report that Sam, 6'2" and 255 pounds, will be a true test of whether or not the NFL is actually open to all kinds of players. He believes that if Sam falls past the third round, then "something stinks. Because this guy is easily a high-rounder."

Bleacher Report NFL Draft Lead Writer Matt Miller agrees that Sam's talents should result in his getting picked in an early round.

"As a player, Michael Sam was one of the most impactful defenders in college football last season," Miller said. "Playing left defensive end, he was able to produce All-American numbers by using his quickness off the ball and high-level instincts.

Sam will have to withstand being the center of attention outside and inside the locker room. And many believe his teammates may have a hard time accepting him.

The NFL reiterated it has a workplace conduct policy that prohibits discrimination of any kind. A portion of the collective bargaining agreement also states: "There will be no discrimination in any form against any player by the NFL, the Management Council, any Club or by the NFLPA because of race, religion, national origin, sexual orientation, or activity or lack of activity on behalf of the NFLPA."

The historic nature of this cannot be overstated. An openly gay player in America's most popular sport has the potential to change a great deal all across the sports world. Gay NFL players—as well as players in other sports—have come out after they retired but never during their career, or, as Sam is doing, as their NFL career is beginning.

Sam's declaration has the potential to open other fronts on this issue as well. It can make current closeted NFL athletes less fearful. It could provide support to younger athletes, in high school or younger, that they don't have to deny their sexuality.

Kudos to Michael Sam.  Now let's see the NFL put its money where its mouth has been.