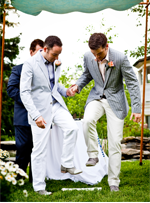 Things have been very busy on the same sex marriage front today.  First, a federal court struck down at least in part Kentucky' gay marriage ban.  Second, the 9th Circuit Court of Appeals approved the state of Nevada's withdrawal of its defense of that state's same sex marriage ban in the wake of  the 9th Circuit ruling in SmithKline Beechum Corp. v. Abbott Laboratories, and set the case up for an expedited ruling.  What is interesting is that the Nevada case will now be defended solely by a non-governmental, Christian Right organization akin to the one that appealed the ruling in Hollingsworth v. Perry. concerning Proposition 8.  Thus, if the 9th Circuit rules that Nevada's same sex marriage ban, there may be no party with standing to appeal that ruling.  In respect to the Kentucky Ruling, here are highlights from (Note: the judge who made the ruling is a Republican nominee - the court's opinion is here) MetroWeekly:

A federal judge Wednesday struck down Kentucky’s ban on recognizing same-sex marriages performed in other jurisdictions in a ruling that labeled the ban as unconstitutional.

“[T]he Court concludes that Kentucky’s denial of recognition for valid same-sex marriages violates the United States Constitution’s guarantee of equal protection under the law, even under the most deferential standard of review. Accordingly, Kentucky’s statutes and constitutional amendment that mandate this denial are unconstitutional,” U.S. District Court Judge John G. Heyburn II wrote in a 23-page ruling.

Citing a number of gay rights cases that have come before the Supreme Court, including June’s decision in Windsor striking down Section 3 of the Defense of Marriage Act (DOMA), Heyburn wrote the nation’s highest court has established “the framework of cases from which district judges now draw wisdom and inspiration.”

Although the District Court’s decision does not strike down Kentucky’s same-sex marriage ban, it concurs with nine other state and federal court decisions striking down bans on recognition of legally married same-sex couples. Kentucky voters approved a constitutional amendment in 2004 defining marriage as between a man and a woman and prohibiting recognition of same-sex marriages performed in other states.

“What this opinion does, however, is make real the promise of equal protection under the law. It will profoundly affect validly married same-sex couples’ experience of living in the Commonwealth and elevate their marriage to an equal status in the eyes of state law,” Heyburn wrote.

Heyburn was recommended to the federal bench by Republican Sen. Mitch McConnell and nominated by President George H. W. Bush in 1992.

"The fact that the government defendants no longer are defending Nevada's exclusion of same-sex couples from marriage makes any delay in these loving and committed couples securing the relief they seek particularly intolerable. The wheels of justice are now on a much faster track."

Gov. Sandoval's request and the earlier decision by Carson City Clerk-Recorder Alan Glover to withdraw his brief were motivated by the Ninth Circuit's recent ruling in SmithKline Beecham v. Abbott Laboratories that discriminatory classifications based upon sexual orientation must receive heightened scrutiny and should be presumed unconstitutional. The heightened scrutiny standard is much tougher to meet and rendered the state of Nevada's arguments in its original brief defending the marriage ban "no longer tenable in the Ninth Circuit," as Nevada's Attorney General conceded in a statement released last week. The withdrawal of the two government defendants leaves only the Coalition for the Protection of Marriage, which the U.S. District Court had allowed to intervene, defending the marriage ban.

In Sevcik v. Sandoval, Lambda Legal, joined by pro bono co-counsel from O'Melveny & Myers LLP and Snell & Wilmer LLP, represents eight same-sex couples challenging Nevada's law banning marriage for same-sex couples. The lawsuit argues that barring same-sex couples from marriage violates the Due Process and Equal Protection Clauses of the U.S. Constitution. A U.S.
District Court judge granted Nevada Gov. Brian Sandoval's motion to dismiss the lawsuit in November 2012, and Lambda Legal appealed the decision to the Ninth Circuit. The State submitted its brief supporting the marriage ban to the Ninth Circuit on the same day as the Court's ruling in SmithKline.

Overall, it appears to have been a good day for marriage equality supporters and a bad day for the Christofacist crowd.
Posted by Michael-in-Norfolk at Wednesday, February 12, 2014