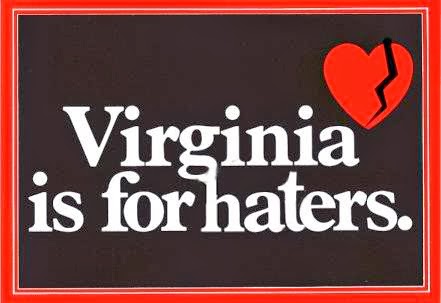 Not many years ago gay hater extraordinaire GOP Del. Bob Marshall admitted that his goal was to drive all gays from Virginia.  While things are changing for the better in Virginia, especially in terms of social acceptance - e.g., the boyfriend and I were at the yacht club tonight and the staff and  heterosexual friends were all happily listening as we described our wedding plans - the legal framework remains decidedly anti-gay.  As a result, Marshall is getting his wish as gays we know and others are moving to Washington, DC, and Maryland and taking their talents and assets with them.  The Commonwealth of Virginia ends up at a net loss.  All so bigots like Marshall and the Christofascist at The Family Foundation can smugly feel good about themselves.  Yes, it is sick, but such is the nature of fundamentalist Christianity in Virginia and elsewhere.  A piece in Slate looks at one Virginia gay couple that has decided to simply leave Virginia to escape the prevalent anti-gay legal reality.  But for family commitments and the boyfriend's salon, I'd leave Virginia without a moment's hesitation.  Here are highlights from the Slate piece:


In my heart, I’ll never be anything but a Virginian. I’ve spent my entire adult life here; I can recite arcane points of the state’s history; I once even helped draw the lines of our state senate districts. I’ve collected a ridiculous assortment of maps and cufflinks, rocks glasses and ties with our state seal emblazoned on them. I love this state so much that I even married a Virginia native.

But this month, I’ll be moving across the river to Washington, D.C., walking away from the state I grew up in. It’s not that I don’t still love the commonwealth. It’s that I finally realized that the commonwealth isn’t a whole lot in love with me.

I’ve lived through the banning of same-sex marriage in Virginia. I was in the fight against the marriage amendment that was added to our state’s constitution in 2006. I’ve heard delegates and state senators say that discrimination in hiring doesn’t exist and then watched them vote against a judge solely because he or she is gay. But these things didn’t really hit home until last year, when my husband and I decided to get married—and had to cross state lines just to get a valid marriage license.

The Virginia House of Delegates, meanwhile, just voted down a bill that would have allowed second-parent adoptions, because they don’t want gay couples to be able to legally adopt children. Gay couples like us. This isn’t to say that we haven’t seen steps toward progress. Sens. Mark Warner and Tim Kaine both support gay marriage and anti-discrimination laws, as do our newly elected governor, lieutenant governor, and attorney general. One of Attorney General Mark Herring’s first acts in his new office was to decline to defend the marriage amendment in court . . .

After the Supreme Court struck down DOMA, we changed our minds about where we wanted the marriage to be held. If we couldn’t get married in Hampton, where my husband was born and raised, or Richmond, where he went to college and I worked for years in the General Assembly, or Alexandria, the little city we decided was going to be our home, did it really matter where we had our ceremony?

If Virginia didn’t want anything to do with us, while D.C. could give us a federally recognized marriage certificate, why wouldn’t we cross the Potomac to get married there? For that matter, why couldn’t we live there?

I’d invested too much of my life to walk away. Yet walk away is exactly what I’m doing now. Virginia will inevitably join other states in allowing same sex marriages some day—but I’m no longer willing to wait for that day to come. I love my husband too much to let my state tell me he’s nothing more than a legal stranger.


I can’t, of course, completely abandon my home. I’ll continue to help out groups whose mission is to advance equality in Virginia, and I’ll support candidates who fight to pass LGBTQ-friendly legislation. We’ll keep visiting our families down in Southeastern Virginia.

I love my commonwealth, and I always will. I just don’t have to live there anymore.

I will admit that I identify with the author's feelings.  I have lived in Virginia longer than anywhere else in my lifetime.  But sooner or later being a third class citizen devoid of non-discrimination protections becomes burdensome.  Why live this way when there are viable alternatives?   And what makes it worse is knowing that this negative atmosphere exists solely so that nasty, horrible people like Bob Marshall, Victoria Cobb and others of that ilk can feel superior and justify their claimed piety by looking down on others.  I truly hope that history looks upon them with horror and that they join the ranks of those deemed to reprehensible like those who  supported the Jim Crow laws and massive resistance.  May their descendants be embarrassed to have them as ancestors.