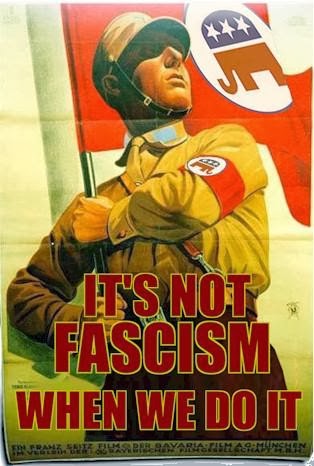 With state level same sex marriage bans falling literally weekly, the Christofascists are in hysterics that their ability to persecute gays and keep us inferior under the law so as to punish us for rejecting their foul religious beliefs may be about to end.  What to do?  Claim anti-Christian persecution and demand that political whores in the Republican Party pass laws that would in effect exempt the Christofascists from non-discrimination laws and allow them to refuse to deal with or even treat gays medically.  As events in Kansas demonstrate, Republicans are only too willing to debase themselves and put forth such legislation.  I have long maintained that Christofascists view themselves as above the civil laws and these bills would make their special rights a reality.  These people and their enablers in the GOP are a clear and present danger to the rule of law.  A piece in Slate looks at this type of foul legislation which we will see being introduced in more and more red states.  Here are excerpts:

On Tuesday, the Kansas House of Representatives overwhelmingly approved a measure designed to bring anti-gay segregation—under the guise of “religious liberty”—to the already deep-red state. The bill, written out of fear that the state may soon face an Oklahoma-style gay marriage ruling, will now easily pass the Republican Senate and be signed into law by the Republican governor. The result will mark Kansas as the first state, though certainly not the last, to legalize segregation of gay and straight people in virtually every arena of life.

If that sounds overblown, consider the bill itself. When passed, the new law will allow any individual, group, or private business to refuse to serve gay couples if “it would be contrary to their sincerely held religious beliefs.” Private employers can continue to fire gay employees on account of their sexuality. Stores may deny gay couples goods and services because they are gay. Hotels can eject gay couples or deny them entry in the first place. Businesses that provide public accommodations—movie theaters, restaurants—can turn away gay couples at the door. And if a gay couple sues for discrimination, they won’t just lose; they’ll be forced to pay their opponent’s attorney’s fees. As I’ve noted before, anti-gay businesses might as well put out signs alerting gay people that their business isn’t welcome.

But that’s just the tip of the iceberg. In addition to barring all anti-discrimination lawsuits against private employers, the new law permits government employees to deny service to gays in the name of “religious liberty.” This is nothing new, but the sweep of Kansas’ statute is breathtaking.

Any government employee is given explicit permission to discriminate against gay couples—not just county clerks and DMV employees, but literally anyone who works for the state of Kansas. If a gay couple calls the police, an officer may refuse to help them if interacting with a gay couple violates his religious principles. State hospitals can turn away gay couples at the door and deny them treatment with impunity. Gay couples can be banned from public parks, public pools, anything that operates under the aegis of the Kansas state government.


Discrimination is hurtful and horrible, and it will also soon be codified into Kansas law, as other red states look on (and follow suit). Homophobes are nothing if not savvy, and while the judiciary dukes out the gay marriage issue, the shrewdest bigots have already moved on to the next battle. There might still be time to prevent such discrimination in bluer states. But in dark-red places like Kansas, anti-gay segregation is the new reality.

As I continue to maintain, these "godly Christians" are not nice and decent people.  They are horrid people and they need to become pariahs to the general public.

Posted by Michael-in-Norfolk at Friday, February 14, 2014