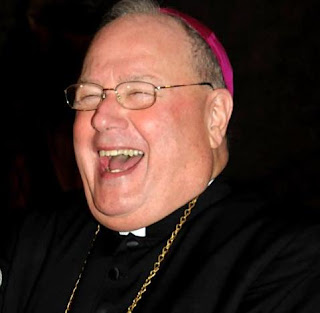 Remember how Cardinal Timothy "Porky Pig" Dolan disingenously said recently that the Catholic Church needed to do better outreach to gays and that his message to gays was "we love you."?   Well, yesterday Dolan showed what his kind of "love" looks like when he called on the New York Police Department to bar gays and their allies from Sunday mass at St. Patrick's Cathedral.  I have long felt that no gay person in their right mind can remain a Catholic and Dolan just helped underscore that truth.  What is wrong with gays who remain in a church that constantly denigrates them and strives to keep them less than full citizens?  Are they masochists? 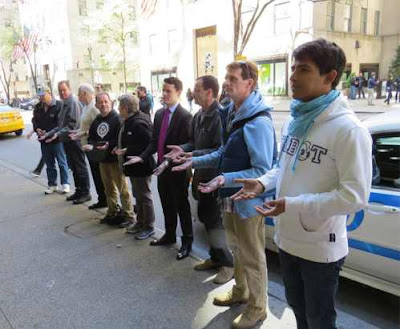 The New Civil Rights Movement looks at yesterday's display of "love" for gays.  Here are highlights:

Cardinal Timothy Dolan today used the NYPD to prohibit from Sunday worship services gay Catholics and their allies by barring their entry into NYC’s historic St. Patrick’s Cathedral, the iconic home of the Roman Catholic Church in New York.

The small group of silent Catholic protestors were threatened with arrest by a New York City Police detective — unless they first washed their hands.

The ten Catholics, who are LGBT and not LGBT, and even parents of LGBT people, were responding to Cardinal Dolan’s April 25 blog post, “All Are Welcome!,” which tells gay people who wish to participate in the Catholic faith, you must first “wash your hands!” They labeled their actions today a “Dirty Hands Vigil.”

Joseph Amodeo, organizer of the action, writes at the Huffington Post.  .   .   .  .   that “the ten of us [who] gathered were greeted by four police cars, eight uniformed officers, a police captain, and a detective from the Police Commissioner’s LGBT liaison unit. The detective informed us that the Cathedral would prohibit us to enter because of our dirty hands.”


As we reached St. Patrick’s Cathedral, we were approached by Kevin Donohue, who identified himself as being in charge of operations for the cathedral. Sadly, Mr. Donohue’s tone was both cold and scolding. What astounded me most was when he said that we could enter the cathedral so long as we washed our hands first.

It was at this moment that Mr. Donohue advised us that if we entered St. Patrick’s Cathedral with dirty hands, we would be arrested and charged with criminal trespassing. Upon hearing those words, I remember standing there thinking, “How can I charged with criminal trespassing in my own home?” It was then that I realized what it meant to be spiritually homeless. This realization was particularly difficult for me in light of the private meeting that I had with Cardinal Dolan on November 27, 2012, at his office in Manhattan. It was during that meeting that he expressed such love and welcome that I find his subsequent “conditional welcome” to be difficult to understand.

In response to the Archdiocese’s threat of arrest, we opted to remain outside where we stood in silent vigil with our palms turned out facing toward the main doors of Cathedral.

Amodeo, .  .  .  .   who resigned last year from the board of NYC’s Catholic Charities, told The New Civil Rights Movement today via electronic message that the ”action on the part of the Archdiocese of New York stands in contrast to the radical welcome that Jesus Christ proclaimed throughout his ministry.” He added that it is “sad that the Cardinal is unable to extend the absolute welcome that forms the basis of Christian theology.”


In reality, Dolan has very dirty hands and is believed by some to have hidden millions of dollars of Church funds in the the Milwaukee archdioceses so that victims of sexual abuse by priests would go uncompensated.  The man is a nasty pig.

I just found your blog this morning! I am so glad I did!
I will return often!
Cheers1

Thank you! I will check out your blog!