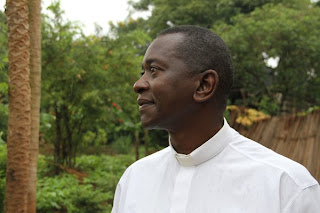 Speaking of sexual abuse by Catholic clergy, a story out of Africa underscores that absolutely nothing has changed under Pope Francis.  Cover ups and sanctions against those who seek to expose the institutional Church's utter moral bankruptcy continue to be the norm.  Fr. Anthony Musaala (pictured above) has been suspended indefinitely for shining a light on what he calls an open secret: Sex abuse by Catholic clergy is a problem in Africa too.  Just like all over the rest of the world.  The problem is systemic and, in my view, is the direct result of the Church's celibacy policy and its bizarre obsession with all things sexual.  Here are highlights from the Los Angeles Times:

KAMPALA, Uganda — He is a celebrity across eastern and central Africa, a gospel music star known to many as the "Dancing Priest." But for years he also was a keeper of painful secrets — his own and many others'.

In going public, Anthony Musaala has forced the Roman Catholic Church in Uganda to confront a problem it had insisted didn't exist. And he may stir a debate far beyond Africa's most Catholic of countries.

The Ugandan priest has been suspended indefinitely by the archbishop of Kampala for exposing what he calls an open secret: Sex abuse in the Catholic Church is a problem in Africa as well as in Western Europe and North America.

The African Catholic Church is fast-growing, pious and traditional. As the church elsewhere forks out billions of dollars to compensate the child sex abuse victims of priests, few African Catholics have questioned the assumption, voiced recently by Ghanaian Cardinal Peter Turkson, that the African church is purer than its counterpart in the West, which is regarded as secular and permissive.
It's not more pure, says Musaala. He says he has the evidence to prove it.

"The Vatican turns a blind eye because it doesn't want to be embarrassed about this blooming church. But I think it's time we had the truth," Musaala says.

In March, he wrote to the archbishop of Kampala, Cyprian Lwanga, about priests who fathered children, kept secret wives or abused girls or boys, and called for a debate on marriage for priests.  .   .   .   .  People know. Nothing is ever done," said Musaala in an interview.

The letter was leaked to the news media. And in response, Lwanga suspended Musaala, saying his statements stirred up contempt for the Catholic Church and damaged the morale of believers.

For African Catholics, the revelations of child sex abuse in Western churches are shocking enough. But the idea that African priests might be sexually abusing boys had been unthinkable. Paradoxically, many believers in Africa are aware that some priests break their vows and father children, but talking about it is taboo.

When he suggested to church colleagues that victims of child sex abuse should be compensated, they were horrified, suggesting that hundreds of people would file fraudulent claims.

"There are real victims who need to be compensated and who need psycho-social help. I think the church needs to set up a fund to deal with these cases," Musaala said.

At times, he fears for his safety and worries about the possibility of a mob attack. He's considering leaving Uganda, even though he loves his country.

I hate to say it, but I think in some ways the Mafia has more scruples and morality than the Catholic hierarchy.  At least in the Mafia, the sexual abuse of children isn't tolerated.  Not so when it come to the "princes of the Church."  As I have said many times, change will come to the Church only when huge numbers of the Catholic laity open their eyes and walk away, taking their financial support with them.  Meanwhile, the criminal prosecution of bishops and cardinals would be a good interim measure.