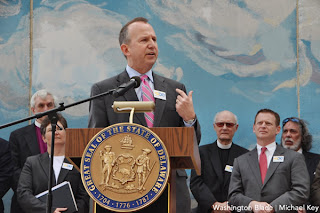 Last week it was Rhode Island that embraced modernity and rejected religious based bigotry against same sex couples and enacted full gay marriage.  Today, Delaware joined the other 10 states that grant marriage equality to all of its citizens.  The final vote took place in the Delaware Senate where it passed by a 12 to 9 vote.   Not surprisingly, every Republican in the state Senate voted against gay marriage - as did two Democrats.  Also not surprisingly, representatives of the Roman Catholic Church spoke against equality under the civil marriage laws.  Governor Jack Markell signed the bill into law shortly after the Senate approved it.   Soon Minnesota will be voting on marriage equality and hopefully another Mid-west state will join the states that have ceased writing religious bigotry into their civil marriage laws.  The Washington Blade reports on today's good news from Delaware.  Here are highlights:

The Delaware Senate on Tuesday narrowly approved a bill that will allow same-sex marriage in the First State.

The 12-9 vote came more than three hours after lawmakers began to hear testimony from House Bill 75 supporters and opponents.

“It is about treating couples the same under the law as all other couples,” Equality Delaware President Lisa Goodman said. “It is about similarly situated people the same.”  Peterson came out as a lesbian while she spoke in support of House Bill 75.

“We are not seeking to redefine marriage,” she said, noting she and her partner of more than 20 years entered into civil union once the state’s civil unions law took effect in Jan. 2012.. “We are seeking to expand the definition of marriage just as the Supreme Court did in the Loving v. Virginia case.”

Father Leonard Klein of the Diocese of Wilmington also testified against the proposal.

Gov. Jack Markell signed HB 75 into law shortly after the Senate approved it.  “Today, we wrote a new chapter in our history and proved, once again, justice and equality continue to move forward in Delaware,” he said. “By signing House Bill 75 into law, we are another step closer towards achieving that goal.”

“In Delaware, we do what is right for our citizens,” state Rep. Melanie George Smith (D-Bear,) who introduced HB 75 in the Delaware House of Representatives last month, added. “This bill is about equality and treating all couples in a loving, committed relationship with equal respect and dignity.”

Although its leading figures at the time of this nation's birth valued equality, Virginia nowadays does not provide equal respect and dignity to all of its citizens.  Instead, thanks to the strangle hold that the Christofascist have on the Republican Party of Virginia, religious based hate and bigotry remain an integral part of Virginia's laws.