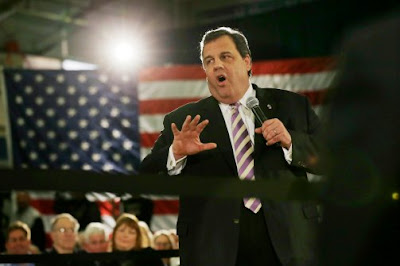 Many of the GOP's supposed prime contenders for the 2016 presidential election seem to be crashing and burning - e.g., now scandal ridden Bob McDonnell and the Bobby Jindal whose popularity is plummeting in his home state - which begs the question as to who might be a viable GOP candidate.  One who might be able to win in a national election should he survive the primaries and not meet the fate of Jon Huntsman in 2012 is New Jersey's Chris Christie.  But, he's had another weight holding him down besides the GOP base distrust toward him: his large girth.  Now, it has come out that Christie has had lap-band surgery, a weight loss surgery and one report said he had already lost 40 pounds.  All of which has the pundit class speculating on what this might mean.  Here are highlights from a Politico piece:

Chris Christie’s stomach surgery could help address one nagging question about his political future — can a man that big really be president? But other difficult political work awaits him if he hopes to be the GOP’s nominee in 2016.

With one 40-minute outpatient lap-band procedure in February, Christie legitimized concerns about his weight — while also showing a measure of humility for a governor not known for that emotion, as he talked about wanting to live for the sake of his four children.

Analysts said shedding the pounds was almost a prerequisite for a potential Christie-for-president campaign. But even after he sheds the pounds, he’ll still have a lot has of repair work to do with conservatives — who remain angry about his late-campaign Hurricane Sandy embrace of President Barack Obama and some of his centrist impulses — if he plans on seeking the presidency.

“Frankly, in a crass political way, this brings him into [an area where people will say] this is a guy with four kids who cares about his family,” said Rick Wilson, a Florida-based political strategist who has never been a Christie admirer.

“This is a win-win for Governor Christie – on the one hand, health and family concerns take precedence over everything, and on the other, he’s also addressing a potential political issue should he seek higher office,” said Brian Walsh, a GOP operative who was recently the communications director for the National Republican Senatorial Committee.

The timing is also key, other operatives said. If Christie drops and keeps off the weight, it could be a powerful demonstration to voters of a politician overcoming personal adversity.

The leeriness of Christie has lingered with some conservatives — their ire has increased as the governor has moved further toward the center during his reelection campaign in a blue state. Such questions about his bona fides and commitment to the party will remain after November, and it is that work he will have to tend to as much as paring down his weight.

Still, overweight or not, Christie would be a top-tier contender if he runs in three years. The GOP field is seen as far more open than on the Democratic side, with Marco Rubio facing hurdles related to immigration reform, Rand Paul still in need of mainstream approval and last cycle’s vice presidential pick, Paul Ryan, all but disappearing from the larger political debate for now.

Two positives that Christie has shown is pragmatism and a willingness to tell the Christofascists to go do something rude and crude to themselves.  Both may come back to bite him in his less ample ass if he seeks the nomination in 2016.