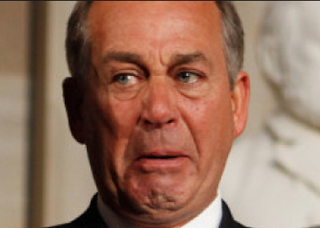 The Republicans are continuing to try to inflate the attack on the U. S. Consulate in Benghazi, Libya, and the immediate aftermath into some sort of major scandal.  Why?  To harm Barack Obama politically, but more likely to try to damage Hillary Clinton whose popularity for a potential 2016 run for the presidency literally annihilates any of the possible GOP contenders.  As if the GOP transparency wasn't obvious as to the real agenda, this scandal mongering is coming from the party that took America to war in Iraq based on deliberate lies.  A war that many in the GOP political class continue to try to justify as a positive good.  The hypocrisy is simply mind blowing.   Politicususa looks at the latest backfire of the GOP efforts.  Here are highlights:

It turns out John Boehner’s smoking gun Benghazi email was more like a firecracker that has blown up in the Speaker’s face.  At his press conference yesterday, Speaker Boehner demanded that the the White House turn over a Benghazi related email:

I hope you all tuned in to yesterday’s hearing on the tragedy in Benghazi. We learned that on September 12 – the day after the attacks and four days before Susan Rice’s TV appearances – a senior State Department official emailed her superiors to relay that the Libyan ambassador – she had told the Libyan Ambassador that the attack was conducted by Islamic terrorists.

According to Boehner this was the Benghazi smoking gun, only it wasn’t.  The New York Times has looked at the email, and it doesn’t say what Boehner thinks it says:

But a copy of the e-mail reviewed by The New York Times indicates that A. Elizabeth Jones, the senior State Department official who wrote it, referred to “Islamic extremists,” not terrorists.

The distinction is important, administration officials said, because while the White House did not initially characterize the attack as terrorism, senior officials, including Ambassador Susan E. Rice, acknowledged the possibility that extremists had been involved in the assault.

Speaker Boehner demanded the release of an email that he thought would prove the White House Benghazi cover up, only to find that the email supports what the Obama administration has been saying.

John Boehner has become a cartoon character. He is Wile E. Coyote falling off the cliff, as one harebrained scheme after another goes wrong.

Make no mistake.  I dislike John Boehner whose hypocrisy is further underscored by his devout Catholicism which means he supports vile old men who participated in a world wide conspiracy to enable and protect child rapists.  Now there's family values for you.  The man makes me sick.

The true shame in the Far Right’s obsession with this tragedy is the effect on the families of the victims. This entire process is being instrumented as a ruse to attempt to shame Hillary Clinton and our President. Our Republican Congressmen spend their days trying to Bamboozle Obama instead of doing what they are paid for by representing their constituents. See what kind of job they’ve done applying the blackface to the POTUS at http://dregstudiosart.blogspot.com/2012/10/bamboozling-obama.html Their hands are sticking to this tar baby as the public is becoming increasing impatient with the nonsense and waste of taxpayer money.