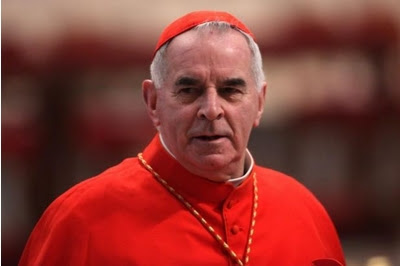 Protecting sexual predators as a bishop or cardinal gets you a plum position in Rome if things get to hot with the law - remember Cardinal Law? - but admit to gay sexual conduct and you find yourself banished sent into exile.  That's the message the Vatican is sending with its order to Scotland's Cardinal Keith O'Brien to leave the country.   Be assured that I have ZERO sympathy for O'Brien who has proven to be a lying hypocrite who used his position to take advantage of seminarians and young priests.   The Scotland Herald reports on O'Brien's forced exile.  Here are excerpts:

Friends of the cleric have said he has been told by Rome to shelve his plans to retire to a church-owned cottage in East Lothian and instead leave the country.

The Herald understands Cardinal O'Brien was given the news yesterday afternoon, three days after being photographed moving his personal belongings from his official residence in Edinburgh to the residence in Dunbar where he had been spending regular weekends over the past few years.

It is the clearest indication yet of the Vatican's unwillingness to let the matter drift and concern that the Cardinal's admission of gay activity over decades and allegations of abuse towards trainee priests continues to damage the Church.

Investigations also continue into claims made by a serving priest in Lanarkshire of a "gay mafia" running seminaries in the 1980s and naming leading Catholic figures.

The Herald revealed on Thursday Archbishop of Glasgow Philip Tartaglia was behind an appeal to the Vatican to intervene after Cardinal O'Brien's re-emergence in Scotland this week.

[S]enior figures in the Church said he was "still causing immense damage".

Blogger friend Father Tony who once served at the Vatican suggests that O'Brien go public with his full story - something that certainly would have the potential to embarrass Rome if others knew of his sexual trysts:

Since the Vatican has cut him loose, he ought to do the same to them. Come on, O'Brien, tell your story. Nothing to lose. Much to gain. Start with Letterman. Say the F word and get bleeped. Everyone already knows you did it.