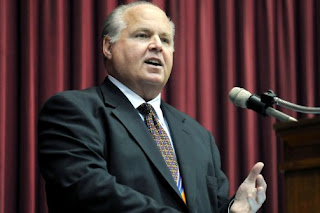 Rush Limbaugh has become increasingly crude and down right hateful in many of his rants.  And advertisers seem to be catching on that attaching their brand to Limbaugh may not be in the best interests of product sales to the larger consumer base even if the spittle flecked, racist conspiracy crowd that makes up Limbaugh's core listeners still are enthralled by his crudeness and bigotry.  A piece in The Daily Beast looks at what may be an effort by Limbaugh's syndication to dump him.  Obviously, such a put down for Limbaugh would be all too delicious.  Here are some article highlights:

“We've had a tough go of it this last year,” Cumulus CEO Lew Dickey said Tuesday morning. “The facts are indisputable regarding the impact certain things have had on ad dollars."

Dickey told analysts on the earnings call that his radio empire’s revenue was down $5.6 million in the first quarter of 2013 on top of a boatload of debt. Why? Parse the weasel words (“the impact of certain things”) and you’ll see that Dickey is blaming one man for the precipitous decline of right-wing talk radio’s profitability: Rush Limbaugh.

El Rushbo is still a giant in the industry, but the impact of slamming Sandra Fluke on his radio show one year ago persists—with some $2.4 million in losses attributed by Dickey to declines in the “syndicated-talk segment.”

Insiders confirm that these declines are primarily due to the ongoing reluctance of national advertisers to attach their name to the toxic talk-radio format that first made Limbaugh famous a generation ago.

“We’re watching the end of right-wing conservative talk radio,” says Jerry Del Colliano, publisher of the radio-industry tip sheet Inside Music Media. “The genre is dying among ratings and dying among advertisers ... Rush is at the end of his career. His constituency is all wearing Depends. And he’s getting himself into trouble he doesn’t need. So can you put Humpty Dumpty back together again? They have been able to improve their advertising picture, but they have not been able to come back.”

“Sandra Fluke was simply the lightning that struck and hit an old building that collapsed,” Colliano says. “She didn’t do it. She helped to bring it down at the end, but it was falling apart on its own.”

He [Limbaugh]  then doubled down on the attack in unusually creepy terms:

“If we are going to pay for your contraceptives, thus pay for you to have sex, we want something for it, and I’ll tell you what it is: we want you to post the videos online so we can all watch."

The blowback was immediate. Elected Republicans, usually loathe to offend the influential talker, distanced themselves from his comments. But more powerful was the boycott that ensued, with 98 advertisers pulling their support for the show.

The numbers announced on Tuesday made clear the impact of the boycott. Rush's comments on Fluke came on Feb 29, leap day of last year, so the Cumulus numbers offer an apples-to-apples comparison: pre-Fluke and post-Fluke. While some advertisters have come back, the show has been unable to regain its footing, and the impact has spread across right-wing talk radio as advertisers have became increasingly gun-shy about association with the genre.