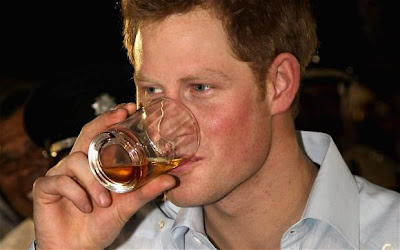 His last U.S. visit drew lots of headlines, but not the type that the British monarchy was looking for.  Especially his naked romp in Las Vegas.  Now, Prince Harry pictured above - yes, he is HOT - seems to be working hard to mend some fences as he charms Washington, D.C., including First Lady Michelle Obama.  A piece in The Daily Beast looks at his charm campaign.  Here are some highlights:

Prince Harry invoked the memory of his mother, Diana, last night as he gave a speech in support of anti-landmine charity the Halo Trust at a British embassy reception, saying Diana would be proud of him.

Diana became the most famous advocate of the charity when she was pictured wearing a clear plastic face mask at a minefield being cleared by the trust in Angola in 1997, shortly before her death.

"My mother, who believed passionately in this cause, would be proud of my association with Halo. In her special way, she adopted it as her own. She would join me, along with all of you, I'm sure, in praising Halo for the amazing work that it has done over the past quarter century, and in hoping that one day soon its humanitarian work will be done.

Harry's speech was the final engagement on an action packed day which saw him wow the Capitol and have a surprise visit with First Lady Michelle Obama.

The First Lady welcomed the 28-year-old prince who was said to be a 'surprise guest' to her home on Thursday afternoon for a reception in honor of military mothers and their children.

Mrs Obama said: "As you all may know, Prince Harry is a captain in the Army Air Corps in the British Armed Forces," and added, “He wanted to be here to thank you for your service.”


Accompanied by Sen. John McCain, Harry visited Capitol Hill and viewed a photography exhibition staged by the anti-landmine organisation the Halo Trust which was closely associated with Diana.
Harry's arrival was marked by hundreds of screaming women, many of whom were said to be staffers.

Senator McCain said: 'He was kind of embarrassed [by the screaming], I think a normal reaction. I'm sure it's not the first time he has had that experience, but in all the years I've been coming here I've never seen such an unbalanced gender gap."

It is Harry's first return to the U.S. since being pictured naked during a game of strip billiards in a Las Vegas hotel.


The tour will give the Prince the chance to show that he has matured enough to take on a senior role in the royal family, as his grandmother cuts back on her workload.   Ahead of this latest trip, the prince's private secretary said Harry wanted to highlight "once again the extraordinary commitment and sacrifice of our injured servicemen and women—-our wounded warriors."

He can charm me any time he wants to.