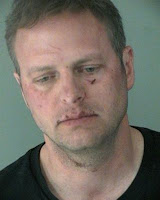 Prior to the repeal of Don't Ask, Don't Tell, the hate merchants of Family Research Council and the always lunatic Elaine Donnelly shrieked that open service by gays and lesbians would usher in all kinds of sexual assaults and destroy morale.  Of course, none of these dire predictions have come to pass.  But they were right about one thing - there is a huge problem of sexual assaults in the military.  And its principally the heterosexual males who are doing the assaulting.  And nothing underscores the problem more than the arrest of Lt. Col. Jeffrey Krusinski (pictured at right and still bearing marks from his would be victims defense of herself) who was charged with groping a woman in a northern Virginia parking lot on Sunday.  Krusinski is the - or more accurately, was - head of the Air Force's Sexual Assault Prevention and Response unit.  The Virginian Pilot looks at the debacle.  Here are highlights:

The sexual battery arrest of the Air Force officer who led the service's Sexual Assault Prevention and Response unit underscores how far the Defense Department has to go in addressing the plague of sexual crimes in the military, the chairman of the Senate Armed Services Committee said Tuesday.

Sen. Carl Levin, D-Mich., told a committee hearing that a Pentagon report to be released later Tuesday reportedly estimates that, on average, there are more than 70 sexual assaults involving military personnel every day.

Authorities in Arlington County, Virginia, said Lt. Col. Jeffrey Krusinski was charged with groping a woman in a northern Virginia parking lot on Sunday. Krusinski was removed from his post in the sexual assault unit after the Air Force learned of his arrest. He started in the post in February.  "While under our legal system everyone is innocent until proven guilty, this arrest speaks volumes about the status and effectiveness of (the Defense) department's efforts to address the plague of sexual assaults in the military," Levin said.

The Pentagon report says that the number of sexual assaults reported by members of the military rose from 3,192 to 3,374 in 2012, while the department estimates that as many as 26,000 service members were assaulted, based on anonymous surveys, according to officials who spoke on condition of anonymity because they were not authorized to speak publicly about the report.

A police report said that the 41-year-old Krusinski was drunk and grabbed a woman's breast and buttocks. The woman fought him off and called police, the report said.


Two cases involving decisions by three-star generals to overturn guilty verdicts in sexual assault cases have outraged members of Congress and propelled a bipartisan push to change the military justice system to essentially strip commanding officers of their ability to reverse criminal convictions.

Sen. Claire McCaskill, D-Mo., is holding up the nomination of Air Force Lt. Gen. Susan Helms, tapped to serve as vice commander of the U.S. Space Command, until the Missouri Democrat gets more information about Helms' decision to overturn a jury conviction in a sexual assault case.

So far, not a word from Mr. Perkins or Ms. Donnelly.  I can only wonder who long before they somehow say these crimes and outrages are all the fault of gays.