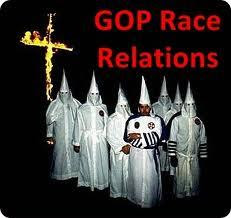 While I am glad he's out of the United States Senate, Jim DeMint is still busy peddling his lies and insanity from the pulpit of the Heritage Foundation - an organization that seems Hell bent on losing all credibility outside of Kool-Aid drinking circles.   How else to explain its new position paper on the consequences of immigration reform and looks more like the work of the KKK or other white supremacists groups.  The truth is that the far right wants no immigration reform because its spittle flecked angry white base cannot abide the fact that whites are headed toward losing majority status in America and with that change many of the privileges that they have enjoyed for centuries.   Both the Washington Post editorial board and an op-ed slam the factual flaws in the report. Here are excerpts from the Post editorial:

FORMER SENATOR Jim DeMint (R-S.C.), now leader of the Heritage Foundation, knows that the nonpartisan Congressional Budget Office (CBO) is likely to judge that immigration reform — including eventual citizenship for millions of undocumented immigrants — will be a shot in the arm for the U.S. economy. After all, the CBO has done so with previous such legislation. That explains why Mr. DeMint, a bitter opponent of legalization, has launched a preemptive attack on the CBO — “puppets of the Congress,” he called the office the other day — and why Heritage has issued a study slamming amnesty for unauthorized immigrants as a drain on taxpayers.

The Heritage paper, chock-full of assumptions that most economists dispute, is a blatant attempt to twist the immigration debate.  .  .  .  .   Influential Republicans, including Rep. Paul Ryan of Wisconsin, Sen. Marco Rubio of Florida and former Mississippi governor Haley Barbour, rolled their eyes at the Heritage report with varying degrees of politeness.

The far right elements in the GOP are becoming uglier and uglier in their racism and bigotry.  It's something that certainly will not help the GOP win over Hispanic voters.  Here are some highlights from the op-ed column:

“There’s a statement at the bottom of the Statue of Liberty,” said the former Republican senator who just took over as chief of the powerful think tank. “Give me your tired, your poor, your huddled masses . . . ”    He and his colleagues then went on to outline their version of immigration reform: No poor and huddled need apply.

“We feel that the best immigration system is one that focuses on bringing high school [graduate] immigrants in,” said Robert Rector, the Heritage scholar seated beside DeMint for the rollout of a new study on the costs of immigration.

Of the Mexican-born people in the United States age 25 and older, nearly 60 percent didn’t graduate from high school, according to a Pew Hispanic Center compilation of census data. Among Central Americans, the figure is 50 percent. To shun those without high school diplomas would dramatically reduce eligibility among Latinos.

When I asked at Monday’s news conference whether his [Robert Rector] conclusions would apply to legal immigrants, he answered “yes” even before I could get the whole question out.

If Republicans don’t find a way to deal with illegal immigrants in the country, they risk political oblivion as the swelling ranks of Latino voters turn against them. Sen. Marco Rubio (R-Fla.) recognized this in reaching a bipartisan agreement to allow legalization — a proposal being denounced by the right.

Never mind the rest of that Lazarus inscription DeMint cited, the bit about accepting “the wretched refuse” and the “homeless, tempest-tossed.” Now they’ll need a diploma.

What truly sickens me about folks like DeMint is that they constantly pat themselves on the back for the piety and religiosity.  Meanwhile, if Christ were suddenly to reappear his attacks on the biblical Pharisees would probably seem mild compared to his judgment of the "godly Christian" crowd of today.  As I have said many times before, these folks are NOT nice people and they comprise the best argument around for why one would want to walk away from Christianity.