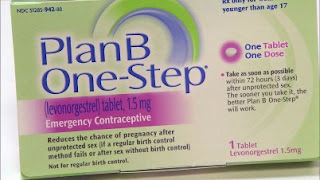 In what seems to me to be one of Barack Obama's dumber moves, his administration is a appealing a judicial ruling to allow that would allow the sale of the "morning after pill" over the counter to women of all ages.  If one truly wants fewer abortions - as both Obama and even the fetus lovers/child haters of the far claim to want - making the morning after pill as widely available as possible should be a no brainer.  For the far right, of course the argument is that such sales would encourage promiscuity and never mind that there would be fewer abortions.  But WTF is Obama's excuse?  He certainly won't win any far right votes and, worse yet, no scientific data supports restricting the sales and thereby almost guaranteeing more unwanted pregnancies and more abortions.  The judge in the case rightly has no patience with the Obama administration's pathetic arguments for restrictions and has made his impatience clear.  Here are highlights from the New York Times:

A federal judge on Friday stepped up his criticism of the Obama administration, accusing the Justice Department of making “frivolous” and “silly” arguments in its attempt to delay making the morning-after emergency contraceptive pill available to women and girls of all ages without a prescription.


Judge Edward R. Korman of the United States District Court for the Eastern District of New York ordered last month that the drug be made widely available and said that raw politics — not scientific evidence — was behind efforts by Kathleen Sebelius, the secretary of health and human services, to block easier distribution to young girls.

On Friday, he denied the request by government lawyers to suspend his ruling while they appeal. In the process, he lashed out again at Ms. Sebelius in unusually harsh terms, questioning her credibility and integrity.

“If a stay is granted, it will allow the bad-faith, politically motivated decision of Secretary Sebelius, who lacks any medical or scientific expertise, to prevail — thus justifiably undermining the public’s confidence in the drug approval process,” Judge Korman wrote.

The issue of how broadly to distribute the morning-after pill is a politically charged one that puts President Obama’s administration at the center of a clash involving some women’s rights groups, conservative opponents of abortion and defenders of scientific integrity.

In Friday’s ruling, Judge Korman said that the government’s appeal of his order was nothing more than an attempt to “vindicate the improper conduct of the secretary.”

The judge repeatedly accused the government of operating in bad faith and said the process of denying broad distribution of the drug had been “corrupted by political interference” for years. He said he did not believe that ordering Ms. Sebelius or the F.D.A. to re-examine their decisions would make any difference.


He also rejected the government’s argument that women might be confused about the drug’s availability if it was made available to everyone without a prescription and then later restricted because the government won its appeal.

Judge Korman called that argument “largely an insult to the intelligence of women.”

America has the highest unwanted teen pregnancy rate in the developed world for one reason:  for too long ignorance and religious idiocy has prevented safe and effective preventive methods from being widely available.  The far right's "abstinence only" sex education has proved to be disastrously ineffective and it is time that science and modernity prevail.  If the Christofascists don't like the drug, then don't buy it.  It's that simple.  Once again they want to force their sick, misguided beliefs on everyone.

What does this mean?

"If one truly wants fewer abortions - as both Obama and event the fetus lovers/child haters of the far claim,..."