I can already hear the shrieks and bleating  of the American Christofascists - actually, you can read it at the misnamed Christian News Net - following the Supreme Court of Canada's ruling that a man could be prosecuted under Canada's hate speech statutes for disseminating anti-gay fliers that went far beyond mere expressions of religious belief.  Not that Christian News Net bothers to tell the truth about the contents of the fliers and instead describes the fliers as merely stating "the Bible’s prohibitions against homosexuality."  The fliers (which are attached as exhibits to the Court's opinion) in fact went far beyond merely reciting Bible verses and claimed among other things that sodomy would be taught to school children, claimed that gay males would be soliciting sex with children, claimed that gays were 430 times more likely to have AIDS, and that gays were three times more likely to sexually abuse children.

In short, the fliers contained the deliberate factual lies and inflammatory language one sees coming out of SPLC designated hate groups like American Family Association, Conservative Values Coalition, Family Research Council and the National Organization for Marriage virtually daily.   In upholding the conviction of "Christian" activist William Whatcott and the $7,500,00 in fines, the Supreme Court of Canada said in part:

The courts pose the question of whether “when considered objectively by a reasonable person aware of the relevant context and circumstances, the speech in question would be understood as exposing or tending to expose members of the target group to hatred”: Owens, at para. 60. In the course of this assessment, a judge or adjudicator is expected to put his or her personal views aside and to base the determination on what he or she perceives to be the rational views of an informed member of society, viewing the matter realistically and practically.

.   .   .   .  “detestation” and “vilification” aptly describe the harmful effect that the Code seeks to eliminate.  Representations that expose a target group to detestation tend to inspire enmity and extreme ill-will against them, which goes beyond mere disdain or dislike. Representations vilifying a person or group will seek to abuse, denigrate or delegitimize them, to render them lawless, dangerous, unworthy or unacceptable in the eyes of the audience.  Expression exposing vulnerable groups to detestation and vilification goes far beyond merely discrediting, humiliating or offending the victims.
Hate speech is, at its core, an effort to marginalize individuals based on their membership in a group.  Using expression that exposes the group to hatred, hate speech seeks to delegitimize group members in the eyes of the majority, reducing their social standing and acceptance within society. When people are vilified as blameworthy or undeserving, it is easier to justify discriminatory treatment.

In the context of this case, Mr. Whatcott can express disapproval of homosexual conduct and advocate that it should not be discussed in public schools or at university conferences. Section 14(1)(b) only prohibits his use of hate-inspiring representations against homosexuals in the course of expressing those views.

If expression targeting certain sexual behaviour is framed in such a way as to expose persons of an identifiable sexual orientation to what is objectively viewed as detestation and vilification, it cannot be said that such speech only targets the behaviour. It quite clearly targets the vulnerable group.  Therefore, a prohibition is not overbroad for capturing expression of this nature.

[T]he fact that a person circulates a hate publication in the furtherance of a sincere religious belief goes to the question of the subjective view of the publisher, which is irrelevant to the objective application of the definition of hatred. Allowing the dissemination of hate speech to be excused by a sincerely held belief would, in effect, provide an absolute defense and would gut the prohibition of effectiveness.

Passages of Flyers D and E combine many of the “hallmarks” of hatred identified in the case law.  The expression portrays the targeted group as a menace that could threaten the safety and well-being of others, makes reference to respected sources (in this case the Bible) to lend credibility to the negative generalizations, and uses vilifying and derogatory representations to create a tone of hatred: see Warman v. Kouba, at paras. 24-81.  It delegitimizes homosexuals by referring to them as filthy or dirty sex addicts and by comparing them to pedophiles, a traditionally reviled group in society.
Whether or not Mr. Whatcott intended his expression to incite hatred against homosexuals, in my view it was reasonable for the Tribunal to hold that, by equating homosexuals with carriers of disease, sex addicts, pedophiles and predators who would proselytize vulnerable children and cause their premature death, Flyers D and E would objectively be seen as exposing homosexuals to detestation and vilification.

Kudos to the Supreme Court of Canada for calling the dissemination of lies and untruths to inspire hate for what it is and refusing to allow the supposed cloak of "sincerely held religious belief" as an excuse for inflaming hatred without consequences.  It is far past time that the Untied States enact similar legislation.   It is one thing to cite Bible passages and to disapprove of others.  It is something far different when one seeks to instill hate and thereby encourage discrimination and violence.  The victims of anti-gay attacks in New York City pictured below shows what hate speech brings about: 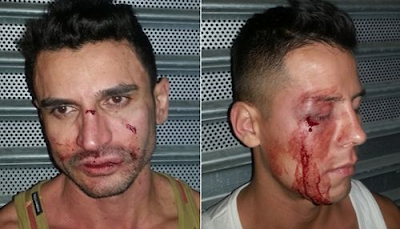 The "godly Christian" folk are not nice people. The sooner society at large recognizes this truth and ends the special rights and undeserved deference afforded to Christofascists the better off we will be as a nation.