I previously wrote about the problems that have gone on in the neighborhood around Old Dominion University and the residence I own in Norfolk.  Yesterday evening an 11 year old boy was shot - thankfully not fatally - while walking down the street not too many blocks from the ODU campus on Colley Avenue.   Sadly, it is symptomatic of the lawlessness that is taking over the area.   And things are not improving.  The result?  My family members are moving out of my house and I've decided to sell the property and invest whatever I make on the place somewhere where law abiding citizens and their receive adequate police protection.   Here's coverage on yesterday's shooting incident from the Virginian Pilot:

A 11-year-old boy was taken to the hospital after being shot Tuesday night, police said.

The shooting happened at 31st Street and Colley Avenue, police said in a news release. The boy was shot while walking outside, then ran home after being shot. The boy’s mother told police about 9:10 p.m., that she was taking him to Children’s Hospital of The King’s Daughters.

The boy’s injuries are not life-threatening, the release said.  Police did not immediately have a motive or information about the shooter.

Given what has been occurring, no motive may have been involved - just random punks and/or gang members getting liquored up and firing guns (which odds on they have in their possession illegally).  Unfortunately, until someone is killed - if even then - Mayor Paul Fraim (pictured above left) and his cronies on City Council will probably not take the situation.  They'd rather pour millions of dollars into a new downtown hotel development rather than provide meaningful law enforcement protection to city residents and property owners.  Oh, and they focus on harassing small business owners in response to what are miniscule problems compared to what I and the 11 year old boy have suffered. For city residents in other areas of the city outside of downtown, under the current City Council regime, they are on their own. Two photos of my property are set out below. 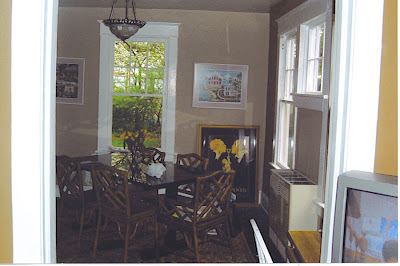