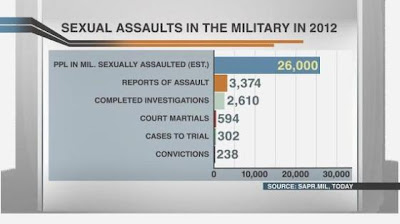 To listen to the Christofascists one would think that all sexual assaults and illicit sexual behavior is caused by us homos.   The U.S. military continues to underscore that the real problem is those nasty heterosexual males who seem to believe that they can behavior outrageously - and in a criminal manner - with impunity.  How else to explain the Army's investigation of a sergeant first class responsible for handling sexual-assault cases at Fort Hood, Texas, over allegations that he has engaged in abusive sexual contact and other related matters. Funny how we don't hear any outrage from professional gay haters like Elaine Donnelly or Tony Perkins when the sexual predators are straights.  The chart above highlights the magnitude of the problem.  The Washington Post looks at the growing scandal.  Here are highlights:

Defense Secretary Chuck Hagel on Tuesday evening ordered the armed services to immediately “re-train, re-credential and re-screen” tens of thousands of military recruiters and sexual-assault prevention officers as the revelation of another sex-crime scandal rocked the Pentagon.

Hagel’s order came in response to the Army’s disclosure Tuesday that a sergeant first class responsible for handling sexual-assault cases at Fort Hood, Tex., had been placed under criminal investigation over allegations of abusive sexual contact and other related matters.

Investigators are also scrutinizing allegations that the sergeant may have forced a subordinate into prostitution, according to a U.S. official familiar with the case.

The Army investigation comes just 10 days after a lieutenant colonel who led the Air Force’s sexual-assault prevention programs was arrested in Arlington County on charges that he groped and battered a woman in a parking lot.

Officials said the noncommissioned officer had been suspended from duties as an “equal-opportunity adviser” and sexual-harassment and assault prevention officer at Fort Hood, one of the Army’s biggest installations. The Pentagon did not disclose when the allegations first came to light or how many victims may have been involved.

Sen. Kirsten Gillibrand (D-N.Y.), also a member of the Senate Armed Services Committee, said she would introduce legislation Thursday to change military law so that independent prosecutors, not commanders, would be responsible for handling sex crimes and other serious offenses. Military leaders have strenuously resisted such proposals.  “It is time to get serious and get to work reforming the military justice system that clearly isn’t working,” Gillibrand said.

The Washington Post reported Monday that military recruiters across the country have been caught in a string of sexual-assault scandals over the past year. The Pentagon, however, does not have a grasp on the extent of the problem because it does not track sex crimes committed by its personnel against civilians before they enlist.

Military officials said most victims are reluctant to press charges because they fear retaliation from their superiors or ostracism from their units, or that investigators won’t take their cases seriously.  Lawmakers and victim advocates also blame an unwillingness among many commanders to deal with the problem forthrightly.

Frankly, allowing the military to police itself on sexual assault matters is like leaving the Catholic Church hierarchy to police the ranks of the clergy against sexual abuse.  It just does not happen and the problem goes on unabated.    Gillibrand is correct that independent prosecutors need to take over sex crimes committed in the military.  Meanwhile, the silence of the Christofascists is deafening.