Why Jason Collins’ Faith is Ignored... And Tim Tebow’s Isn’t 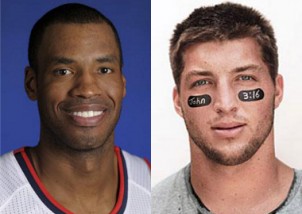 Personally, I find it a sweetly ironic coincidence that Jason Collins' coming out story broke at the same time as the news that Tim Tebow, the darling of the white Christofacists, had been dumped by the New York Jets after only one year.  It is likewise ironic that outside of Christofascist circles most people have seemed generally indifferent to Tebow's demise.  Perhaps they were just relieved at the prospect of no longer having to deal with Tebow's shameless self-promotion and out of place religiosity on the football field.  Does the man seriously think God cares which team of over paid modern day gladiators wins?  Give me a break.

The foregoing comments aside, what has been largely missed in connection with Collins' story is that Collins is equally religious.  He simply doesn't wear it on his sleeve and engage in shameless theatrics like Tebow.  Indeed, it was Collins' faith, including religious dictates against lying that helped Collins finally come out of the closet.  Religion Dispatches looks at the largely missed aspects of Collins' faith.  Here are highlights:

Collins and Tebow are a study in contrasts, perhaps especially when it comes to their faith. Tebow is known for game-saving theatrics and an equally performative profession of faith politicized by the culture wars. He’s positioned himself as an all-American poster child for the pro-life movement and homophobic groups like Focus on the Family. Collins, on the other hand, is a career role player who keeps his head down on the court and his devout Christian faith, rooted in family and community identity, private.

Where Tebow’s religiosity has been endlessly analyzed by the media and championed by the white religious right, the centrality of Collins’ Christianity and faith community in his decision to come out has been ignored.


Collins pointedly mentions that his parents “instilled Christian values” in him. He credits “the teachings of Jesus… particularly the ones that touch on tolerance and understanding,” for helping him to accept others (and ultimately himself) unconditionally. In his behind-the-scenes proﬁle of how Collins’ historic interview came together, Jon Wertheim writes that the “deeply religious” Collins found spiritual validation for his plans to come out in a “daily prayer manual” that was a gift from his grandmother—speciﬁcally a passage he read just days before his announcement:

The clarion call of freedom sounds within my soul, trumpeting the truth that the love of God liberates me from unhappiness, hurt, or fear. I bid farewell to any emptiness from the past, and open myself to realizing my heart’s deepest longing and aspiration.

Collins’ now famous opening lines—“I’m a 34-year-old NBA center. I’m black. And I’m gay”—allude to the inseparability of blackness from sexuality in a culture that often expects black gay, lesbian, and bisexual people to choose one identity over the other. Collins makes the point, however, that his religious upbringing is just as integral to his identity as his race and sexuality.


[T]he glossing over of his faith since his announcement is striking, especially given that the faith of black athletes often ﬂies under the radar of both the media and the religious right.

Tim Tebow is an example of how the public face of Christian athletes, like the public face of American Christianity in general, is overwhelmingly white—despite the fact that black Americans are the racial demographic most likely to identify as “very religious.” A recent Barna poll found that Tebow is by far the most well-known Christian professional athlete in the U.S. (with 83% awareness from the public), . . . .

There are many reasons for this marginalization of black Christian athletes. Segregation and racism in American churches and media, and widespread ignorance of black religiosity, are partly to blame, but it’s also due to the fact that white evangelicalism is more politicized—or, perhaps more accurately, is differently politicized—than Black Church traditions tend to be. Collins’ faith, like that of many black athletes (even socially conservative ones), doesn’t ﬁt the model of public performance of religiosity, or culture war conﬂicts the media expects and the religious right demands of its spokespeople.

Black athletes often don’t wear their faith—or their politics—on their sleeves in quite the way Tebow, Curt Schilling, and other prominent white Christian athletes have. Devotion in Black Church traditions is often more of a personal, family, and community affair; less conducive to media theatrics.

Since Collins’ announcement, Christians and media commentators on the right have circulated a meme claiming that he is being celebrated for being gay, while Tim Tebow has been “bashed” and persecuted for being open about his faith.

This is the world as many on the religious right see it: not one in which Tebow is famous precisely because he’s a mediocre white quarterback who is vocal about his faith, nor one in which Collins and other black athletes who are also “avowed Christians” routinely get passed over by the media and the public—and certainly not one in which gay, lesbian, and bisexual people face systemic discrimination. Instead, they live in a world where Tebow, who according to Barna has a 73% favorability rating with the American public when it comes to his discussion of religion, is being vaguely persecuted for being a straight, white, Christian conservative man.

As for the white Christian athletes like Tebow who make a public display of their religiosity, I'd remind them of  Matthew 6:5-6 which says:

"And when you pray, do not be like the hypocrites, for they love to pray standing in the synagogues and on the street corners to be seen by others. Truly I tell you, they have received their reward in full.  But when you pray, go into your room, close the door and pray to your Father, who is unseen. Then your Father, who sees what is done in secret, will reward you.

I can only assume that in his self-promotion, Tebow never took the time to read these passages.