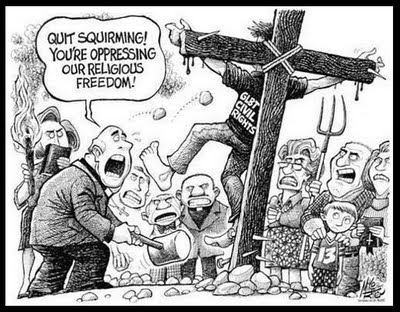 Like the Roman Catholic Church, the Southern Baptist Convention ("SBC") regularly closes its eyes to sexual abuse by SBC pastors and, when it recognizes the massive problem at all, it is typically to disclaim responsibility and say that churches are independent of SBC control.  Of course, that never stops the SBC from throwing parishes out of the SBC if they are too gay friendly.  It's definitely an example of talking out of both sides of their mouths so as to take no action on the huge sex abuse problem withing the denomination.  Also, like the Catholic Church, few things - other than money and controlling the lives of others - is more important than persecuting gays.   A case in point?  The SBC's hysteria against including same sex bi-national couples in the pending immigration reform bill.  Bob Felton has a good rundown on the SBC's anti-gay bigotry at Civil Commotion.  Here are highlights:

The SBC’s Richard Land has issued a strongly-worded letter promising active opposition to the pending immigration bill if it makes any provision for same-sex couples.


The Southern Baptist Convention’s public policy arm has made it clear to United States senators it will “actively oppose” immigration reform legislation if it includes provisions for same-sex partners.

In a Tuesday (May 14) letter, Richard Land told Judiciary Committee leaders the “issue is a deal-breaker” for the Ethics & Religious Liberty Commission (ERLC).

“On this point we seek to be ‘Waterford’ crystal clear: If [any] same-sex partner reunification provision is included in an immigration reform overhaul, the [ERLC] would not merely hold a neutral position on the broader bill, but would instead actively oppose it.”

Seriously? The bill is irredeemable if it treats the life-sized choices of gays with respect? There is no benefit or value in the bill which could overcome that? Hostility to gays is all or nothing?
It gets better.


“First, we have biblical concerns. As a matter of interpretation of Scripture, Southern Baptists do not condone any sexual relationship beyond the sacred bonds of marriage between a man and a woman. Most Southern Baptists, therefore, could not in good conscience support efforts by the government to aid the reunification of same-sex partners.”

And just where does he get off insisting that the laws of a secular Republic must comport with the Bible? Does the man know nothing of his country’s history?  Seriously, the haughtiness and ignorance are just breathtaking.

The sooner that conservative denominations like the SBC die off, the better off the nation will be.  All they bring to the table is hate and bigotry.  And let's not forget the SBC's origins: it broke off from the larger Baptist churches in the 1800's for the sole purpose of supporting slavery.  It's not a history to be proud of and the mindset has change little over the past century and a half.