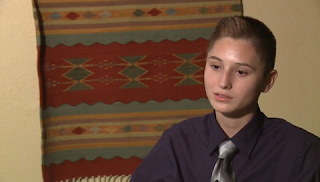 At times I find it shocking as to just how mean and petty the Catholic Church is towards LGBT individuals.  It's not about religious belief.  It's simple deliberate cruelty and nastiness.  And there seems to be no limit as to how far Catholic officials will go to mistreat LGBT individuals.  How else to explain an Albuquerque, New Mexico Catholic school which is demanding that Damian Garcia, a trans student, wear a girl's gown to graduation.  Everyone accepts Damian as a male, including his parents, but not the asshole school principal who seems to be finding delight in this gratuitous cruelty.  Here are highlights from KRQE News 13:

A Saint Pius senior was born a girl, but refuses to go graduate in a girl's gown.  The Catholic school says too bad.

At the Saint Pius High School graduation ceremony, the girls wear white gowns and the boys wear black.  It is school policy and Saint Pius insists Damian is a girl..

“I just want to walk in my black robe, nice and proud and have that memory to look back on with my family and friends,” said Damian Garcia. “I would rather not walk than to embarrass myself by wearing a female robe.”

Damian Garcia was born Brandi Garcia, but identifies as a male even having a legal name-change last year.  Fellow students, teachers and faculty call Garcia "Damian" and so does Damian’s family.  “I look at him and I call him my son. That's how he wishes to be acknowledged is as a male,” said father Luis Garcia.

Damian's father calls the school's decision heartbreaking.  “All you want in life is to see your kids happy and healthy. You never want to see them suffer or being ridiculed or be made fun of,” Luis said.

To me, it's yet another example of the "godly folk" not really giving a damn about others.  Something this simple and yet it is too much to ask from a heartless and morally bankrupt institution.  Fortunately, the school is garnering negative publicity world wide and a petiton has been started to underscore the unpopularity of the school's cruelty:

Over 11,000 people have signed the petition on MoveOn.org’s petition website to St. Pius High School Principal Barbara Rothweiler, asking that the school administration allow Damian Garcia to walk in a boy’s black cap and gown for St. Pius’ graduation on Wednesday, May 22nd.

The petition was started by Torrey Moorman’s two sons in Albuquerque, New Mexico.  Torrey and her two sons, Phynneaus (8) and William (14), heard about Damien Garcia's story on the local news and refused to go to bed that night until they could get involved, citing their Quaker values.  They started the petition, and have subsequently gotten in touch with the Garcia family and now the entire family is involved in the effort.

I hope readers will sign the petition.  I did.  If you want to find true Christian conduct, don't look for it in the Catholic Church.