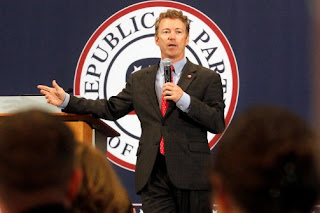 As noted many, many times on this blog, the Republican Party grassroots - where primaries are carried out - has been hijacked by Christofascists and their closely aligned (if not indistinguishable) cousins in the Tea Party.  All of this was allowed by past party elites who saw short term advantage in getting the Bible beaters out to the polls for the GOP.  Now, the problem facing GOP candidates is how to win primaries by attracting the spittle flecked, knuckle dragging GOP base yet not utterly alienating more main stream voters who view the Christofascists with distrust at best and outright revulsion at worse.   The Daily Beast looks at Rand Paul's current tight rope walk as he tries to please the Christofascists yet not cause general election voters running screaming to Democrats.  Here are some story highlights:

What to make of maverick Kentucky Senator Rand Paul’s latest speechifying? “I’m not advocating everyone go out and run around with no clothes on and smoke pot,” Paul insisted last Friday while speaking to a group of religious Republicans in Cedar Rapids, Iowa. “I’m not a libertarian. I’m a libertarian Republican. I’m a constitutional conservative.” Mindful of evangelical contempt for libertarianism—one attendee told the Washington Post, “Straight libertarianism has nothing Christian about it”—Paul came across as almost desperate to establish that he’s not endorsing state laws legalizing marijuana and allowing for gay marriages.

In a special aired on the Christian Broadcast Network (CBN), Paul talked about his willingness to devolve questions of marriage equality to the states not out of philosophical principle but out of political expediency: “We’re going to lose that battle because the country is going the other way right now,” he said. “If we’re to say each state can decide, I think a good 25 or 30 states still do believe in traditional marriage, and maybe we allow that debate to go on for another couple of decades and see if we can still win back the hearts and minds of people.”

The gap between his remarks to evangelicals and those directed at the party faithful raise the question: Is Rand Paul simply the latest in a long line of Republicans who cultivate libertarian-leaning voters—broadly speaking, people who believe in fiscal conservatism and social liberalism—as they gear up for presidential bids? And then disappoint those same voters almost immediately?


It’s far more likely that if Paul continues to send significantly different messages to different audiences, he will end up alienating all his possible supporters.

One way or another, we’ll be finding out. Paul is set to talk to libertarian-leaning New Hampshire residents later this month and then will be heading to the evangelical hotbed of South Carolina as he continues to test the waters for 2016.

If he’s serious about scraping the moss off the Republican Party, he needs to boldly defend his most contrarian, libertarian positions rather than temper his comments based on his speaking venue.

If the GOP is losing elections, it’s precisely because, as Paul put it at CPAC, the party “is encumbered by an inconsistent approach to freedom.” Independent voters are generally turned off by a party that seems fixated on yesterday’s social mores. Growing majorities of Americans are totally fine with legal pot and gay marriage; fully 80 percent of us believe that abortion should be legal under some circumstances, with 61 percent saying it should be unrestricted in the first trimester of pregnancy.