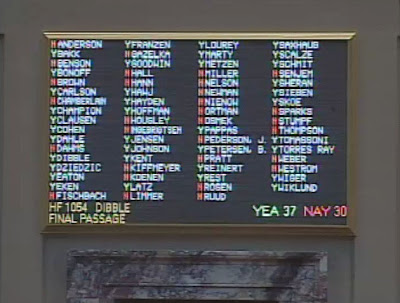 There's wonderful news out of Minnesota where the state Senate has followed the House and approved a gay marriage bill.  Governor Mark Dayton will sign the bill into law tomorrow afternoon at 5:00PM.  It is wonderful to see yet another state kick religious based bigotry and discrimination  onto the trash heap of history where it belongs.   Meanwhile, selfish Christofascists actually have broken down in tears over the fact that they can no longer force their hate and fear based beliefs on all Minnesotans (more on this later).  The Star Tribune looks at today's historic vote in which equality and freedom of religion for all triumphed.  Here are highlights:

The vote, on the heels of a vote last week in the House, brings to a close a decade of debate over marriage that has echoed through the Capitol, bringing thousands of friends and foes of gay marriage to its marbled dome to express their deeply held feelings.

The measure next moves to Gov. Mark Dayton, who will welcome it with his signature in a celebratory ceremony at 5 p.m. Tuesday on the south steps of the Capitol.  Once it is signed, Minnesota will become the twelfth state to legalize same sex-marriage.

"It's historic and I can never be so proud of this body and of Minnesotans," said Sen. Jeff Hayden, DFL-Minneapolis. On the Senate floor, Hayden said that his wife is white and noted that just 50 years ago, his loving relationship would have been barred.

Sen. Dan Hall, R-Burnsville, said up until the last he was praying for a miracle and the Senate to reject the bill.  “Some people have said that they are concerned about being on the right side of history. I am more concerned about being on the right side of eternity,” said Hall.   .  .  .  .  I grieve inside because I feel we are opening the doors to Sodom and Gomorra. And in the end, God is going to be the judge," said Nelson, of Blaine, tears running down her cheeks.

Civil marriage - especially once DOMA is hopefully struck down next month by the U.S. Supreme Court - provides over 1100 rights and benefits.  Rights and benefits that ought to be available to all life couples if equality under the U.S. Constitution is to mean anything.  Yet people like Ms. Nelson and Minnesota State Rep. Peggy Scott, a Republican, break into tears over the ending of anti-gay bigotry and the stigmatization of same sex couple families.  Gay marriage takes NOTHING from their heterosexual marriages.  Absolutely nothing.   All they have lost is discriminatory laws that harm others and/or serve as a prop so that these shallow, horrible people can feel superior over others.  Or perhaps they're crying because they've lost one more support for their mythical, house of cards religious beliefs which they know in their hearts are not supported by reality.   They ought to be crying instead for the evils that they have inflicted on others.