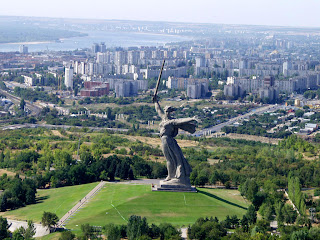 In college I was a history major with an emphasis on Russian history.  I've always wanted to see St. Petersburg and other sites in Russia.  But with the rising homophobia in that country being whipped up by government officials and the Russian Orthodox Church - which has a long history of getting in bed politically with the forces of repression - I won't be going to Russia any time soon.   Reports of the recent torture and murder of a young gay man underscore the foul hate and bigotry that are the fruits of religion, especially when allied with political forces who desperately want scapegoats to distract the populace from governmental corruption and failed government policies.   Huffington Post looks at this horrible crime that is of a type that is only encouraged by the far right Christians who continue to demonize gays and spread malicious untruths.  Here are highlights:

A 23-year-old man has been tortured to death in Russia in an apparent homophobic attack, investigators said Sunday, amid growing fears by rights groups that anti-gay sentiments are on the rise in the country.

The victim's battered and naked body was found in the courtyard of an apartment building in the southern city of Volgograd on Friday morning, said a spokeswoman for regional investigators.
The young man had suffered numerous injuries, including to the genitalia, and had been sodomised with several beer bottles.

"He was raped with beer bottles and had his skull smashed with a stone," Natalia Kunitskaya, a spokeswoman for the Volgograd region branch of the Investigative Committee, told AFP.
She confirmed the attack was believed to have been a hate crime, in a rare admission from Russian law enforcement agencies on the sensitive issue of homophobia in the country.

Two men aged 22 and 27 have been detained in connection with the attack, the Moscow-based Investigative Committee said in a statement on Saturday. One of the suspects has a criminal history, investigators said.

The attack comes at a time when rights groups are already worried about growing discrimination against homosexuals as President Vladimir Putin seeks to play up traditional values in a bid to rally support during his third term in office.  Putin, who prides himself on his macho image, has repeatedly denied that Russia was violating gay rights.

But homophobia remains widespread and socially acceptable, and almost no public figures have come out as gay.  Russian parliament is considering passing a controversial national law banning "homosexual propaganda" among minors. Critics say the bill's wording is so vague that it could be used to justify any kind of repression against gays.  The law is already in place in several regions including Saint Petersburg.