Why the IRS Targeted Conservative Groups 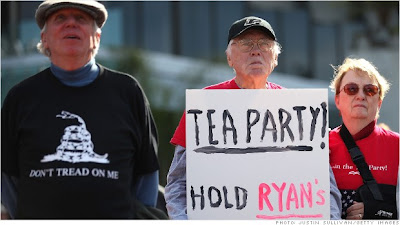 For years I have found it ridiculous that far right "family values" organizations and similar groups have been able to receive tax-exempt status as either "charities" or "educational" organizations when in reality they engage in political activities 24/7.  Here in Virginia The Family Foundation is a prime example and at the national level there are numerous hate groups such as Family Research Council, American Family Association and others which are tax exempt.  It is beyond ridiculous that taxpayers are indirectly supporting these foul organizations that are anything but charitable in any sense of the word.  They are political operations first and last.  The same holds true for many of the equally insane and vicious Tea Party organizations.  A piece at CNN looks at why the IRS would focus on some of these organizations in enforcing the tax laws and IRS Code which bars non-profits from any significant political activity.  Here are highlights:

The IRS watchdog is set to release documents this week that will reveal fresh details on why the IRS picked on conservative groups that were seeking tax-exempt status. The tax agency has apologized and given a rudimentary explanation.   Here are some questions and answers that throw light on what happened.

What does the IRS have to do with charities anyway?

The IRS has to make sure that charitable, education and religious groups -- that don't have to pay taxes on their operations -- are not scamming the federal government. The IRS gets 60,000 requests each year from such groups seeking tax-exempt status, according to Lois Lerner, director of the IRS's exempt organizations office.

Most charities are tax exempt under the 501(c)(3) category. The classification prevents groups from getting directly involved in politics, because donors can deduct contributions from their income taxes. Groups that want to dabble in politics can also apply for tax-exempt status under a different category called a 501(c)(4). This status allows the groups to campaign and participate in elections, as long as it's not their main purpose.

So why was the IRS digging into these groups?

It goes back to 2010, when a "Citizens United" Supreme Court ruling allowed unlimited spending by corporations and labor unions on political campaigns. It also said that political donors should be disclosed. That case prompted a slew of politically-affiliated groups, including Karl Rove's Crossroads GPS, to become charitable organizations under 501(c)4, which allows donors to be kept secret.

How many groups were targeted?

The IRS says that 300 groups were set aside for extra review. About 75 of them had the words "tea party" or "patriot."

Why did the IRS target conservative groups?

We'll find out more when the audit becomes public this week.

Among the legal work I do is at times assist groups in applying for non-profit status and filling out the applicable IRS forms and compiling the supporting documentation.   Being thus familiar with the regulations and requirements I suspect that the IRS was probably fully justified in giving higher scrutiny to groups most likely aimed at pure political activities.  I wish the IRS would audit The Family Foundation.