Michele Bachmann: 'We Need To Focus' On 'Spiritual Warfare 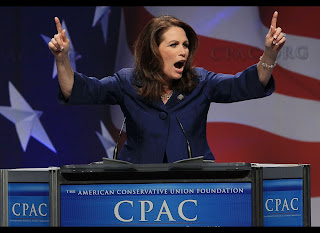 As noted in a post yesterday, many of the Christofascists - which increasing translates to much of the GOP base - are in tears over the recent victories for gay marriage in Rhode Island, Delaware and now Minnesota.  Their house of cards/fantasy based religious beliefs are increasingly being rejected by rational, thinking people and they simply cannot stand seeing their ability to control the lives of others being diminished.  It's no surprise that the always delusional Michele Bachmann who belongs in an insane asylum rather than the halls of Congress has once again had an outburst of batshitery and diarrhea of the mouth.   Every time this woman opens her mouth, I cannot help but think WTF is wrong with the people in her district?  Is the water tainted or something?  With the marriage votes over the last weeks, Bachmann again showed her lunacy.  Here are highlights from the Huffington Post:

Christian conservatives must turn to "spiritual warfare" to fight against the powers of Satan, Rep. Michele Bachmann (R-Minn.) told an audience at a speech in April.

During an appearance at the evangelical Liberty Counsel's Awakening 2013 captured by Right Wing Watch, Bachmann urged attendees to keep up the fight against gay marriage, abortion and "Islamic jihad," claiming that God supported those campaigns. She then took a line from the Bible's book of Ephesians to suggest that these battles are supernatural struggles against the forces of evil.

Bachmann often invokes religious rhetoric in her calls to action. Last week, she suggested that 9/11 and the attack in Benghazi, Libya, 11 years later were God's "judgment," making a call for people to join her in a Sept. 11 "Day of Prayer and Fasting" later this year.

The 9/11 event, organized by right-wing outlet World Net Daily, has drawn some high-profile backers. Action-movie star Chuck Norris recently signed on to the event, saying that he believed the event's goal of "cranking up our spiritual warfare" was necessary.

Ultimately, what Bachmann is railing against is the decline of Christianity which is being hastened by lunatics such as herself.   Bob Felton sums up well what is happening at Civil Commotion:

There’s not much, in my view, which requires analyzing; the Christian narrative is incontestably false. There was no Adam and Eve, there was no Fall, there is no such thing as Original Sin — and so there is nothing for Jesus to do. Christianity has no more an offer than a set of ordinary to very bad ethical teachings.

Christianity is losing hearts and minds in the educated West because it is objectively untrue, and because many of its ethical teachings are very bad. It deserves to be losing.

And as more people begin to reject the snake oil being hawked by the far right, it will be increasingly difficult for people like Bachmann to remain in office much less be deemed relevant in a modern world.