Ignorance and Conspiracy Theories - The Core of Today's GOP 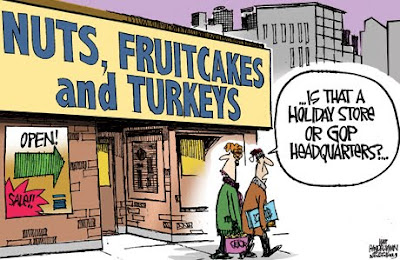 I realize that I frequently beat up on the today's Republican Party a - s opposed to the GOP as it once was when I was an activist - but it is difficult not to do so when one sees the open embrace of ignorance and suspicions of conspiracies under every bush the cretins of the party base dream up.  My grandparents and late parents would be horrified at what the GOP has become and would want nothing to do with it.  Indeed, when John McCain tapped Sarah Palin as his VP nominee, my late mother said she simply could not hold her nose and vote for a ticket that included Palin.  Now, things have gotten even worse and I again can only conclude that to be a Republican nowadays, one needs to either (i) have had a lobotomy, (ii) be a white supremacist, or (iii) be a religious extremist/homophobe.  A new a new PPP poll underscores the ignorance of the GOP base:

41 percent of Republicans say they consider this to be the "biggest political scandal in American history" compared to only 43 percent who disagree. Only 10 percent of Democrats and 20 percent of independents agreed.

Of the 41 percent of Republicans who consider Benghazi to be the worst political scandal in American history, 39 percent are unaware that Benghazi is located in Libya. 10 percent said it’s in Egypt, 9 percent in Iran, 6 percent in Cuba, 5 percent in Syria, 4 percent in Iraq, and 1 percent each in North Korea and Liberia, with 4 percent unwilling to venture a guess.

One can only hope that these ignorant, uninformed individuals in the GOP base do not actually go out to the polls and vote.  I'd also posit that I hope they are using birth control and not spawning more cretins like themselves.   Other interesting findings from the PPI poll are as follows:

By a 56/38 margin voters say passing a comprehensive immigration reform bill is more important, and by a 52/43 spread they think passing gun background checks should be a higher priority than Benghazi.

As I have argued before, the intellectual collapse of the GOP ties - in my view - directly with the rise of the Christofascists in the GOP and the attendant flight of sane party members who were repulsed by the Christofascists and their refusal to recognize the concept of the separation of church and state.
And when it comes to clinging to every insane conspiracy theory, no one is worse than today's GOP and its Christofascist/Tea Party base.  A case in point?  An op-ed piece in the misnamed  Christian Post imagining a conspiracy surrounding the Boy Scouts of America's revisiting its anti-gay policy is illustrative.  Here are highlights:

[W]hy the top down full court press on the Boy Scouts by gay-rights leaders around the country?

Well, unbeknownst to the BSA officials who were being pounded by activists from all sides, the two same-sex marriage cases were also slowly and silently making their way to the U.S. Supreme Court.

If you are a Supreme Court "watcher" most agree that any close decisions are usually about Justice Anthony Kennedy. He is the most obvious and most often-discussed swing vote on the high court. And if you read his previous opinions on social issues, Kennedy does not seem as concerned with legal issues as with public opinion. Kennedy's opinions are not filled with extensive analyses of the nuisances of equal protection, state's rights or statutory construction. He seems more concerned with culture, polling numbers and signs of the times.

If the BSA changes its membership policy and allows open homosexuality among its boys, you can be guaranteed that this event will be cited to by Justice Kennedy in his decision on the same sex marriage cases.

So as the Supreme Court is taking up the next big "gay rights" issue this year, it's no large leap to consider the timing of this latest BSA gay rights push as aimed at influencing those few Justices who are susceptible to the court of public opinion, especially when it comes to cries of "discrimination."

What's at stake in this Boy Scout controversy is not just the future of Scouting. It is also the future of the institution of marriage and whether or not we will undergo yet another "fundamental transformation of America."

At times I have asked when will the local GOP city and county committees pass out KKK style robes at the beginning of their meetings.  Perhaps the better question is when will these committees begin handing out straight jackets before the nutcases convene.
Posted by Michael-in-Norfolk at Tuesday, May 14, 2013

I think it's truly amazing that they insulate themselves from all the NON-PARTISAN polls! They don't even respond with polls they've taken because they can't even FAKE the numbers any more! They just keep spewing spittle and frothing at the mouth without a damn leg to stand on. I hope the intelligent Americans (and even the unintelligent ones who vote) are watching this travesty unfold.