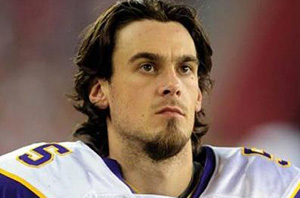 As noted a week or so ago, the Minnesota Vikings dumped punter and gay marriage and gay equality advocate Chris Kluwe, some speculated because of his outspokenness on gay rights.  Kluwe took it with grace and class and felt his advocacy was more important than football.  Now, as Fox Sports is reporting, the Oakland raiders have signed Kluwe.   For his part, Kluwe says he will continue to be an outspoken LGBT ally.  Here are story highlights:


Throughout their history, the Oakland Raiders have seen their share of colorful personalities. And in 2013, they’re adding another, signing punter Chris Kluwe on Wednesday. The signing will be formally announced on Thursday.

Kluwe, who was released by the Minnesota Vikings on May 6, will step in for Pro Bowler Shane Lechler, who left Oakland for the Houston Texans via free agency. Kluwe’s contract is for one year, and is for the league minimum.

“I’m excited to be an Oakland Raider and be playing in California,” Kluwe, who attended high school in Southern California before going to UCLA, told me on Wednesday. “Now, my family can actually come to games.”

The 31-year-old Kluwe averaged 45.0 yards on 72 punts last season as a Viking. Kluwe is the all-time Vikings leader in average yards per punt (44.4) and second all-time in total punt yards (27,683) and total punts (623). Kluwe is arguably the greatest punter in franchise history

Kluwe is known for his mind and mouth, as well as his leg. He is a vocal advocate of equality in sports (and life), and says he will continue to speak for what he believes.  “I’m still going to be myself socially and continue to tweet and interact with my fans,” Kluwe said.

For now, however, Kluwe is hoping for the best.  “Hopefully, I’ll be able to play for the next seven years and end my career in California,” the punter, who graduated from UCLA with a double major in political science and history, said.

I wish Kluwe lots of luck.  Would that there were more pro athletes willing to really speak out against bigotry and religious based discrimination.
Posted by Michael-in-Norfolk at Thursday, May 16, 2013