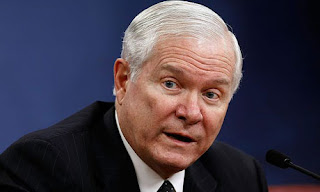 The fever ridden, fetid swamp that is today Republican Party continues to grow in insanity and toxicity as the far right elements and those within the GOP who are only to willing to prostitute themselves to these elements continue to try to conflate the attack on the U.S Consulate in Benghazi, Libya into a scandal.  Their motivation is two fold: (i) a racist motivated hatred towards Barack Obama and (ii) a desperate desire to harm Obama and Hillary Clinton politically.  Reality has nothing to do with much of anything in today's GOP.  Its like an insane asylum where the attendants have all fled and left the crazies in charge.   Former Defense Secretary Robert Gates is one of the few Republicans left willing to call out GOP insanity.  As Think Progress reports he basically bitch slapped his GOP contemporaries on Face the Nation yesterday.  Here are story highlights:


Former Secretary of Defense Robert Gates, a Republican who was appointed to the position by George W. Bush, told CBS News on Saturday that he would have handled the situation in Benghazi the same way that the Obama administration did last September.

During an interview that aired on CBS’ Face the Nation on Sunday morning, Gates defended the administration’s reaction to the attacks in Libya and dismissed many of the criticisms leveled by his fellow Republicans as “cartoonish”:


“Frankly, had I been in the job at the time, I think my decisions would have been just as theirs were,” said Gates, now the chancellor of the College of William and Mary.
“We don’t have a ready force standing by in the Middle East, and so getting somebody there in a timely way would have been very difficult, if not impossible.” he explained.
Suggestions that we could have flown a fighter jet over the attackers to “scare them with the noise or something,” Gates said, ignored the “number of surface to air missiles that have disappeared from [former Libyan leader] Qaddafi’s arsenals.”
[...]
Another suggestion posed by some critics of the administration, to, as Gates said, “send some small number of special forces or other troops in without knowing what the environment is, without knowing what the threat is, without having any intelligence in terms of what is actually going on on the ground, would have been very dangerous.”
“It’s sort of a cartoonish impression of military capabilities and military forces,” he said. “The one thing that our forces are noted for is planning and preparation before we send people in harm’s way, and there just wasn’t time to do that.”

Gates also defended former Secretary of State Hillary Clinton, who has increasingly become the subject of Republican criticism. Gates responded with a simple and emphatic “no” when asked if he believed Clinton could possibly be involved in any sort of a cover up, as some Republicans have baselessly suggested.

I met Mr. Gates at a scouting function in 1996. He was a really friendly guy who talked to my scouts as though they were equals. He sure handled it well when the crowd he was speaking to got quiet, then some joker up in the ozone (we were in Hoosier Hall at IU) yelled "where's Elvis?" He looked up, totally deadpan and replied "I know who you are, I know where you live." The place cracked up!

Anyway, it's good to see he is still the intelligent gentleman he was back then.