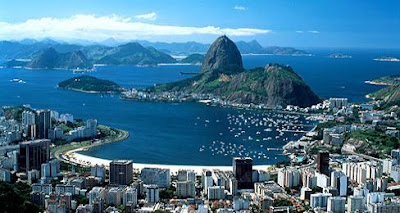 One has to wonder if the U.S. Supreme Court is paying attention to recent events as it cobbles together opinions in Hollingsworth v. Perry, which challenges Proposition 8, and United States v. Windsor, challenging DOMA.  Since oral arguments before the Court, three more U.S. states have enacted gay marriage laws as have the countries of New Zealand and France. Now, the highest judicial authorities in Brazil have ruled that gay marriage must be granted nationwide in that country, putting it on an equal footing with Argentina.  Do the Supreme Court justices (other than Scalia, Thomas and perhaps Alito who are knuckle dragging Neanderthals)  really want to be viewed by history as reactionary bigots?  Here are highlights from Globalpost on the latest developments in Brazil:

A top judicial panel cleared the way for same-sex marriage in Brazil Tuesday, ruling that gay couples could not be denied marriage licenses.

The National Council of Justice, which oversees the Brazilian judicial system and is headed by the chief justice of the Supreme Court, said government offices that issue marriage licenses had no standing to reject gay couples.

The Supreme Court "affirmed that the expression of homosexuality and homosexual affection cannot serve as a basis for discriminatory treatment, which has no support in the Constitution," said Chief Justice Joaquim Barbosa on the council's website, referring to a 2011 ruling by the top court.

Barbosa also said there was no reason for the government's marriage licensing offices to wait for the Brazilian Congress to pass a law authorizing same-sex marriage.

Again, will the justices do the right thing on gay marriage, or will America fall further behind other modern nations and prove that the U.S. Constitution''s promises are nothing more than a hubris filled lie?    Once many Americans looked down on Brazil and Argentina as backwards nations.  Now, it is they who make the USA look backwards.