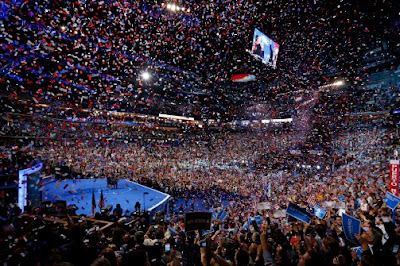 A previous post looked briefly at the decision Pablo Pantoja, former GOP Hispanic Outreach Director for Florida, to not only reign from his post but register as a Democrat.   Now, Pantoja is talking more about his decision and it ought to be setting off alarm bells across the GOP - especially given new reports that Hispanics have not yet begun to fully flex their voting strength.  Will the GOP listen?  Probably not given the reality that the grassroots of the party is controlled by the Christofascists and Tea Party, both of which groups have high levels of racism mixed in with their religious extremism.  An article in The Daily Beast looks at Pantoja's defection - note that he has realized that the GOP does in fact see minorities as" lesser human beings".  Here are highlights:


Conservatives should consider this a warning sign. The Republican National Committee’s former Hispanic outreach director for Florida has left the GOP and registered as a Democrat, citing a “culture of intolerance.”


Pablo Pantoja is a decorated Iraq war vet who began his brief career with the GOP by volunteering for John McCain’s 2008 presidential campaign and serving as field director for Marco Rubio’s triumphant 2010 senate campaign. He says he was originally drawn to the GOP “because of my business-minded mentality. Fiscal issues are important for all families—Hispanics and non-Hispanics.”

But a recent anti-immigration report from the right-wing think tank Heritage Foundation sent the Puerto Rican–born Pantoja heading for bluer pastures this week. Not only did the paper tally the cost of immigration form at an absurdly high $6.3 trillion, but its author, Jason Richwine, was found to have written an overtly racist dissertation in 2009 that labeled American immigrants as having lower IQs than those of white natives.

“This report form Heritage really hit me,” Pantoja, 33, says about his decision to decamp from the party, which he first announced to friends on Facebook. “It hit me. Immigration has made America great before and it will continue to do so. But when you look at their report, you start wondering, Wait a minute, is it really about the $6.3 trillion, or is it because they believe that Hispanics have a lower IQ and they're less of a human being?”


The “culture of intolerance” that concerns Pablo Pantoja does not characterize the entire party, but it has surfaced too much for him to dismiss it as a coincidence: “There was the incident with the black reporter who got some peanuts thrown at her [at the RNC convention] in Tampa. Now, you can look at it and say, ‘That was just one person.’ But then you look at what happened at CPAC with this other guy that said slaves should be thankful because they got food and shelter ... So is it really one person—or is it really the base? Is it really the culture of intolerance? That’s what I view as what's going on.”

Just as critical to Pantoja is some party leaders’ refusal to confront these voices. Even worse is when they cater to them. “You've got people who feel that they have to be, quite frankly, a little bit ‘out there’ to appeal to the base.”
“Hopefully they'll renounce this kind of culture of intolerance overall,” Pantoja says. “Maybe the rhetoric will change. I don't see it happening. But somebody's got to take a stand.”